Polling in Solomon Islands got off to a slow start after all the excitement of the campaign period. 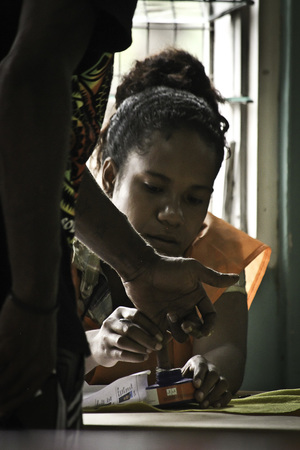 More than 287,000 voters are registered for the one-day poll to elect a new 50-member parliament.

Koroi Hawkins reports from the Honiara.

"Earlier this morning small clusters of eager voters gathered at polling stations to witness the sealing of the ballot boxes and be among the first to cast their votes when polling opened at 7. The mood in the City is calm after all the excitement of campaigning on Devil's Night as the eve before the elections is termed here. Commonwealth Observers were also present to witness the start of polling, with one of them saying the process looked efficient and transparent. Some voters said after casting their vote that they wanted a change of government and better services for rural communities. Polling stations close at 5pm this afternoon and the counting process is expected to take at least three days before official results are known."

Full interview with our reporter Koroi Hawkins in Honiara