French Polynesia's opposition says it is lodging a complaint with the public prosecutor over the use of public funds to get tenders for the Mahana Beach Resort on Tahiti. 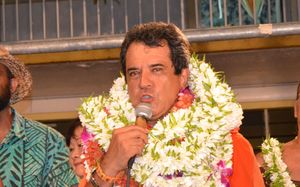 The announcement was made by Richard Tuheiava, who was the unsuccessful candidate in the weekend presidential election that saw Edouard Fritch replace Gaston Flosse.

Mr Tuheiava has questioned the process and claims that 300,000 US dollars was paid to each of the three bidders for the project, saying crazy sums have been spent without hesitation.

The project has been pushed as a means to create jobs and attract tourists by Flosse, who lost office this month because of a corruption conviction that also entailed a suspended jail sentence and a 170,000 US dollar fine.