The Northern Marianas healthcare corporation says it is monitoring access points everyday to safeguard against the Ebola virus. 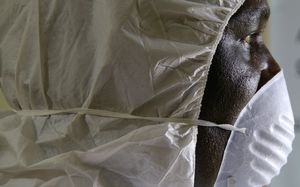 A health worker, wearing a protective suit, conducts an ebola prevention drill at the port in Monrovia. Photo: AFP

According to the World Health Organisation, in past outbreaks, up to 90 percent of humans who contract the virus have died.

The current outbreak in West Africa has a 47 percent survival rate.

The Commonwealth Healthcare Corporation says updates are being sent out to local state and federal partners twice a week and it's in close communications with the Centres for Disease Control and Prevention Quarantine Office in Hawai'i.

The corporation says it wants the community to know it is addressing the issue.