The secretary general of the Pacific Islands Development Forum says last week's second annual meeting was a success and another step towards establishing itself as a significant body in the region. 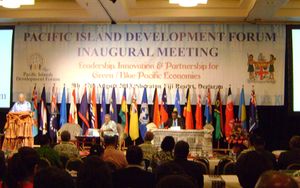 Feleti Te'o says the summit in Nadi ended on Friday with five memorandums of understanding being signed between member states and other organisations to work towards developing a plan for sustaninable green growth in the Pacific.

Mr Te'o says Japan also announced that it will provide 1.3 million US dollars over the next three years to help establish capacity building programmes for Kiribati and Tuvalu.

He says for the forum to have achieved this in only its second year is a milestone because it demonstrates the confidence organisations have in the PIDF.