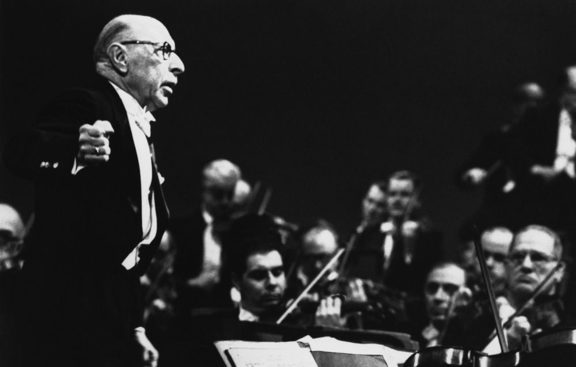 Stravinsky composed music in many forms over his career, starting as a pupil of Rimsky-Korsakov. He's particularly well-known for the ballet music he composed for Diaghilev’s Ballet Russes including The Firebird, Petrushka, and The Rite of Spring.

Stravinsky visited Aotearoa in 1961 to conduct a series of performances with New Zealand's National Orchestra, which was part of the broadcasting service at the time (and later renamed the NZSO).

Today we're sharing a performance and some memories of that tour:

"It was just amazing to me that a person of Stravinsky's stature and importance was coming to conduct .... and I just loved his music .... so I went along to the concert in Auckland, and, possibly I was just a bit homesick as well, so after the concert I got the train down to hear him conduct in Wellington. I always remember that time in my life ... it seems like a crazy thing to do but, 19 years old, you do that sort of thing. Now I'm 79, but I've always loved the excitement of his music."  - Bev Smith

Gerald Lascelles travelled from Christchurch to attend the Wellington concert, and met Igor Stravinsky in the St George Hotel.

"I was having a cup of coffee in the lounge there before departing, and suddenly to my surprise Mr Stravinsky I saw walking across the lounge on his own. I was a starry-eyed youngster then and I had a bit of a fight with myself about whether I should approach such a distinguished man - it was a bit of a cheek, but nonetheless it was an opportunity and I thought perhaps he might forgive me, so I went up to him. He told me there was no problem, and he was delightful! He was very indulgent with his time. He's a small man, physically, and seemed more curious about what I was doing, so I told him I was in the law, and he told me that his father had been in the law, as he himself had been. I told him I was doing mainly criminal law, and he asked me if I enjoyed it. I said "well, you meet a lot of crazy people in it". He laughed, and said that you meet them in music too.

"He had a twinkle in his eye, he was a very cheerful, very warm man - he was the sort of person you warm to straight away. I liked him immensely."

"I grew up on a farm, and we didn't get electricity until I was nine, so before that there wasn't a radio to listen to. The local station played classical music between two and three p.m. That was it. Then I had to go to boarding school, and none of us had a radio, although by then record players did exist, and I had one or two long-playing records which I could listen to in the holidays.

I came to Wellington to train at teacher's college and I took Music One at Victoria University. My Christmas present that year from my grandmother was a gold series ticket [subscription] to see the National Orchestra. I'd never been to an orchestra before.

At university, Professor Page played us some music by Stravinsky - the Symphony of Psalms - and I don't know why but it just clicked with me and I thought 'Oh, I love this!' Then I heard Stravinsky was coming to Wellington .... It was just such a wonderful experience! I did know a bit about The Firebird -  I had lots of ballet books I'd read, but here was Stravinsky who had written this music, and we were going to see him, and listen to the music! It was just so magical that there was the man who'd written it. It was so enjoyable." - Angela Campbell

Christopher Salmon was a trainee cellist with the National Orchestra when Stravinsky worked with them. The eight trainees where able to sit alongside Stravinsky during the rehearsal and watch him. He changed a bit of phrasing and he doubled some notes up that weren't there originally - he was still working on the music. A few years later a visiting conductor stopped the orchestra as it rehearsed the Firebird, saying "No, no you can't do that phrasing. Who told you to do that?" to which the orchestra leader put his violin on his lap, looked up and replied "I think it was a chap named Igor."

This co-production between the NFU and the NZ Broadcasting Service shows Stravinsky at the Wellington Town Hall in 19671, guiding the orchestra through the finale of his work, The Firebird Suite.

Stravinsky has his own particular style of conducting: no baton, and emphatic hand and arm movements. The applause is rapturous. Stravinsky appears delighted with the occasion; the orchestra (later renamed the NZ Symphony Orchestra) shower him with flowers."  - NZ on Screen

"It was incomparable to anything else. You can't compare playing Stravinsky's music with Stravinsky conducting - no matter how good any other conductor is.

"Those (other) conductors come and they go. They do wonderful things… but they are tomorrow's chip paper. Stravinsky is here forever.

"He was just so friendly. There are photos of him sitting down in the intervals with the orchestra all crowding around and he's chatting away. God's not supposed to speak to you like that!"

Conductor Igor Stravinsky's 1961 visit created a real stir with some of our audience too.

"There have been many memorable NZSO  concerts in my sixty plus years of concert going, but the most outstanding is definitely when Igor Stravinsky conducted in 1961 the then National Orchestra playing his Rite of Spring in the Wellington Town Hall.  I still vividly remember his somewhat stooped figure making his way on to the rostrum, then spreading his arms out so that from the stalls he resembled an eagle in flight; and then the amazing music he conjured from the orchestra. Not only did he conduct without a score or a baton, but for most of the time his hand were clenched. Even now the memory of it still gives me goosebumps!"

"There’s no more fitting description of the excited atmosphere in the Auckland Town Hall as we waited for Stravinsky – Stravinsky himself! – to appear than ’electric’. It seemed that magic was in the air and when the magician himself brought his 'Firebird' to life, the effects of the spell he cast have lasted with me to this day."

The end of Stravinsky's life

Igor Stravinsky died fifty years ago, in 1971. There was a worldwide television broadcast of the impressive funeral rites held in the church of St Peter and St Paul in Venice. Viewers may recall the vivid image of the black draped gondola dipping across the lagoon toward the funeral island of St Michele where the composer’s body was to be buried next to the grave of his mentor and friend, Serge Diaghilev.

As the strange black craft lumbered toward the distant white walls of the cemetery surrounded by sea, the final passage of Stravinsky’s Symphony of Psalms was played in accompaniment. Few could fail to be moved. This was one of the greatest composers of the twentieth century.