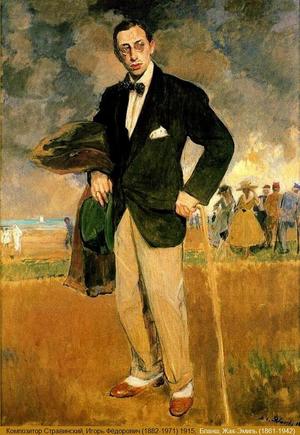 There is little doubt that Stravinsky was the most chameleon of composers, reinventing himself at least four times. He appears as the pupil of Rimsky- Korsakov. He achieves international fame and loathing with the harsh and idiosyncratic voice of the scores written for Diaghilev’s Ballets Russes. In the nineteen-twenties, he is re-born as the great imitator of the principals of eighteenth century music. He begins to produce a series of so-called neo-classical works that stretch from the ballet Apollo to his opera The Rake's Progress. Then to everyone’s surprise, in the late 1950s, when he had reached his sixties, he starts to explore the techniques of Schoenberg and the new Viennese school, methods he had hitherto publicly despised. This produces some of his finest late choral works like Threni and the Requiem.

Igor Stravinsky died in 1971. Those who were alive then may well remember the world wide television broadcast of the impressive obsequies held in the church of St Peter and St Paul in Venice. Even more vividly, they will recall the image of the black draped gondola dipping across the lagoon toward the funeral island of St Michele where the composer’s body was to be buried next to the grave of his mentor and friend Serge Diaghilev. As the strange black craft lumbered toward the distant white walls of the cemetery surrounded by sea, the final passage of Stravinsky’s Symphony of Psalms was played in accompaniment. Few could fail to be moved. We were burying the greatest composer of the twentieth century.