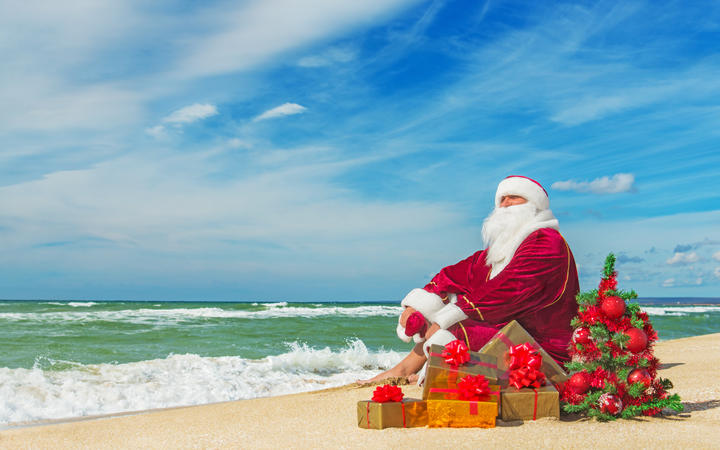 You are a talented bunch! Congratulations to all entrants- here's the pick of the lot, with recordings by the RNZ Concert Choir!

The Kauri and the Kowhai (Kathy Gillard, Chch)

Good King Wences launched his yacht
Upon the Feast of Yule.
Though the sun was blazing hot
Humidity was cruel.
Loaded up with ham and beer
He sailed around the isthmus.
To see his mates and bring some cheer
To folks alone at Xmas.

Good King Wences called his friend
To say he'd got the ham.
"Sorry mate" came the reply, "I've
joined the House of Islam."
"Pig's a thing I just can't eat
Most other foods are fine."
- "That's O.K." the King replied
And chucked it in the brine.

Wences then tacked back and bought
Beef snarlers by the dozen.
But half way round the bay he thought
He felt his cell-phone buzzing.
"Yo G.K., it's Paige here bro.
Just bumped into Terry, and
Wond'ring if you already know
We're both now Piscaterian."

By then the King was short on time
So just kept sailing onward.
With snags for bait, he dropped a line
And soon he caught a Gurnard.
While planning how he'd cook the fish
He got a txt from Megan.
Requesting this year's Xmas dish
Was gluten-free and vegan.

Wences then threw back his catch
And pressed on, empty-handed.
The gurnard winked, then in a flash
Upon the beach Wens. landed
All his friends, with food, were there
Together they did sing:
"You've been so kind to us, this year
We're banquetting the King!"

In our Christmas Summer  (Dana Livesay)

Heaven seems to hold him, as the stars embrace
Sparks from dying campfires, soaring into space.
In the bleak midwinter a stable place sufficed
But here a sleeping bag would cuddle the new Christ.

Campervans and caravans, all have gathered here,
Neath the wings of moreporks, caroling the air,
Mothers hush their children, campfire embers glow,
Silent is the blessing that our sleeps bestow.

What can I bring for Christmas barbecue?
If I were a farmer, lamb chops, they would do;
If I were a wise one, I would know for true
That love is what will feed us, love from me to you.

Recent stories from The Works