When was Lilburn's landmark song-cycle 'Sings Harry' actually first performed? A few years ago, Peter Mechen asked the late Donald Munro to shed some light on the mystery, and also talked with other interpreters of the work. 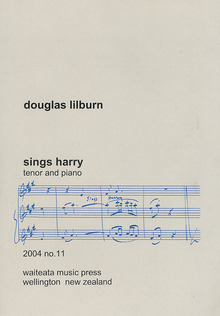 The six 'Sings Harry' poems were chosen by Douglas Lilburn from a collection written by Denis Glover, published as a group in 1952, but written over a ten-year period prior to their publication.

Glover’s 'Sings Harry' songs have long been regarded as quintessential New Zealand literature, the hero a laconic, self-reliant wanderer, wanting nothing and giving nothing in return, and yet deeply appreciative of the land and conscious of the poignancy of time’s passing.

As his artistic contemporaries were also doing, Glover in his poetry was exploring ways of coming to terms with the bitter-sweet nature of existence in such a rugged isolated land as New Zealand; and the character of Harry gave voice to the poet’s distinctive brand of satire, sentiment and straightforwardness.