Co-curator of the NZ Festival of the Arts - Laurie Anderson

Laurie Anderson is taking audiences at the 2020 New Zealand Festival of the Arts on A Trip to the Moon, an out of body experience via virtual reality.

It's one of four shows the American musician, writer and multi-media artist is bringing to the festival, which she's co-curating along with New Zealand artists Lemi Ponifasio and Bret McKenzie. 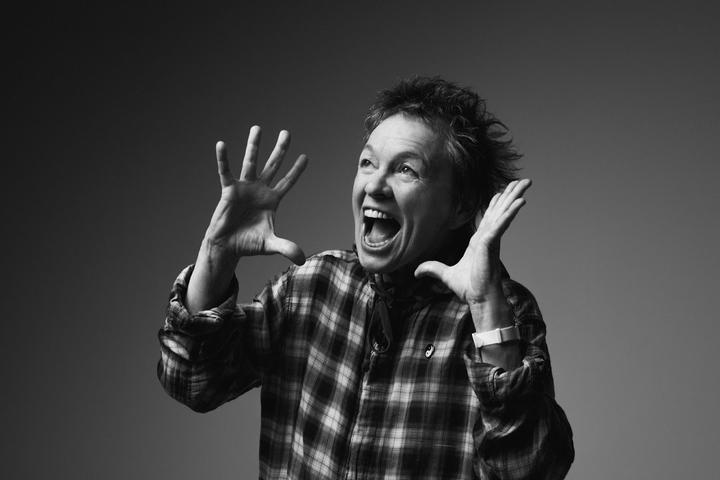 Anderson launched her career in the early 1980s with the least likely of hit records. ‘O Superman’ it was over 8 minutes long and both it, and its accompanying video, were utterly unforgettable.

In the almost 40 years since ‘O Superman’ was released, Anderson has never stopped exploring music and technology.

She's also keeping her late partner Lou Reed's music alive following his death in 2013. His guitars have a starring role in another work coming to Wellington.

“It probably has something to do with our dark political scene here. And that there's so much brittleness in the world now and corporate organisation that is about speed, expertise, bigness wowness.

“So, I find myself going the opposite direction into something that really moves me emotionally, and of course can also be something that's really big and impressive, but generally by the time it gets too big it loses its heart and so I looking more and more for things now that that are kind of heart explosions, you know?” 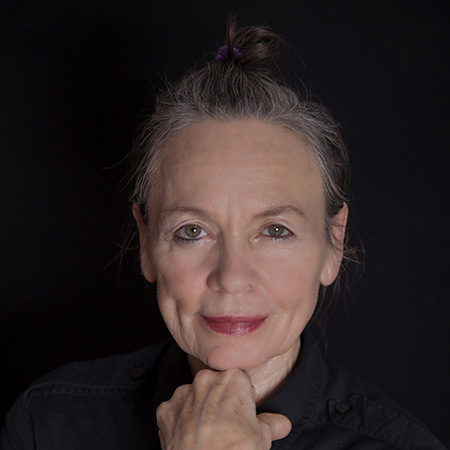 Anderson says she has a number of projects on the go.

“Right now I'm working on a couple of things; I’m refining a quartet that I'm trying to record and unsuccessfully recorded a couple of times. And we're going to make one more try in a couple of weeks. We're working on a new orchestra piece that's based on the pilot logs of Amelia Earhart on her last trip around the world.”

She is also working on some “very big and very bad paintings” in her studio at the Brooklyn Navy Yard.

“You have to imagine a place where they used to build huge ships in World War Two and it still is a huge Navy Yard with all of the big cranes and materials that you'll need to build a big warship.

“And it's now a kind of a place where artists can make big projects and also, a lot of start-up companies. There's one I'm next to where they are designing a system to grow all your own food in your apartment. And that means like rice, beans, wheat everything. It's a crazy place to be.”

The moon looms large in her work, she was NASA's first artist in residence, but says her interest in the moon pre-dates that.

“As a kid that's one of the first big things you see in the sky, other than the sun, of course. And I think, for so many people, one of the most mysterious also because the moon is always connected with dream life and poetry and the idea of reflection as opposed to emanation.

“Every other Japanese poem is about the reflection of the moon in the water so that it becomes more about poetry and representation than the moon itself. That's how it becomes part of our dream world.”

One of the other works features Lou Reed’s guitars droning - it harks back to Reed’s experiments with sound in the 1970s, she says.

“In the ‘70s Lou started to lean them against amplifiers and create this fantastic howling feedback loops and they were all so out of control and so beautiful. He also used these things in Metal Machine Music in 70s, 80s and 90s.”

After Reed died, Anderson was determined his guitars wouldn’t end up in a sterile museum setting.

“We wanted to do some things and really to listen to his music and since he wasn't there, we thought let's use his guitars and just set that up as a sound installation.

“It's just an amazing because it was not something that I ever could ever have predicted. We would set these up and people would come and bring their instruments and just play [along] with the drones.

"Or they would come and do ballet or Tai Chi, or they bring their laptop and write their novel because you have to surrender to this sound. You come into this thing and you're like, what is this? I almost can't stand it, but it's got me. It's got my alpha waves going. And so you kind of collapse on the floor, you're like, whoa! I hadn't counted on that.”

Anderson is the steward of Reed’s considerable archive which is now housed at the New York Public library and freely available to the public.

“When he first died, I was very overwhelmed, not just with missing him, but also it’s like a 15-storey building fell on top of me - so many things, you know, what do we do with these things? And it's very hard to figure that out, but I was able to get just a wonderful archivist and it took me several years to get through the material.

“I didn't want it to be in a place that was like a white-glove sort of place, where you'd have to really be a scholar to look at it, it's in the (New York Public) library where anyone can go and hear rehearsal tapes, or just talking - endless amounts of material.

“Lou really loved kids, he had a kind of kid energy, so he wanted you know, if you're just like a kid and you want to listen to some rehearsals, you can go in there and you don't have to be a scholar, you can just check them out.”

This article was originally from Standing Room Only with Lynn Freeman.