Salina Fisher on an upward spiral 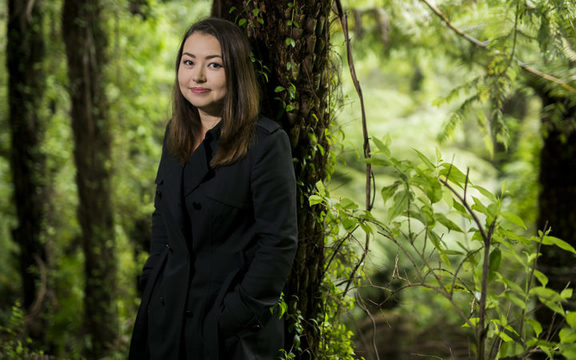 At just 23 Wellington composer Salina Fisher has taken the SOUNZ Contemporary Award at the Silver Scrolls for the second year in a row. Her winning work, Tōrino for string quartet is based on transcriptions of Taonga Puoro player Rob Thorne.

Discovering a clip of Rob on Youtube Salina was mesmerized by all the powerful and haunting voices that Rob could conjure from the pūtōrino, an instrument which has the unique ability to function as both a ‘trumpet' and a ‘flute'. It was the most deeply moving listening experience in her recent memory. So she tracked Rob down and they began improvising together - him on the pūtōrino and her on violin.

The pūtōrino embodies Hine Raukatauri, goddess of music and its shape is based on the New Zealand case moth cocoon - hence the name Salina chose for her work - Torino, ‘spiral’.

Tōrino was covered by the band Kahu at the Silver Scroll Awards in Dunedin last week.