A Beginner's Guide to the BBC Proms

As RNZ Concert broadcasts highlights from the 2019 BBC Proms, here's our beginner's guide to what is billed as 'The Greatest Classical Music Festival in the World'. 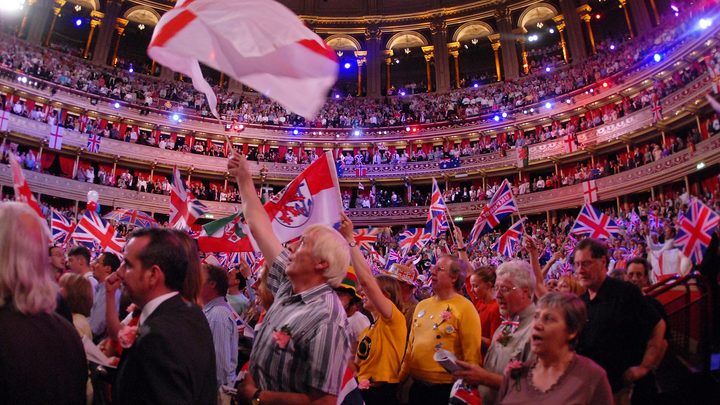 Not quite. The BBC Proms is an eight-week classical music festival that takes place over the English summer. Musicians from all over the world (including some very clever and famous ones) assemble to take part in the series of concerts. It all ends with the raucous “Last Night of the Proms” which might be what you are referring to.

So how long has this been going on?

How did it all kick off?

The Proms began life back in 1895 as “Mr Robert Newman’s Promenade Concerts”. Robert Newman, manager of the newly built Queen's Hall, had the revolutionary idea that classical music should be for everybody, not just those who could afford it. He teamed up with the young and brilliant conductor Henry Wood and together they created concerts to appeal to the masses and then halved the price of the tickets.

I bet that ruffled some feathers in the classical music world…

Correct. Robert Newman was accused of dumbing down classical music and that his concerts were “not refined” (he had the seats removed so people could mill about eating, drinking and smoking). But the upshot was, the lower middle classes got their first experience of classical music.

And how did the BBC come into it?

Finances were precarious even with the popularity of the Proms. The BBC took over after Newman’s death in 1927 and the Proms continued, becoming the BBC Proms.

And even two World Wars and the Blitz didn’t stop the Proms?

Well… things got trickier. The First World War brought intolerance for all things German (an awkward time for Classical Music considering the nationality of many of its composers). But Wood and Newman insisted that 'the greatest examples of music and art are world possessions and unassailable even by the prejudices of the hour'.

A further hurdle occurred in 1939 after Britain declared war on Germany and the BBC decentralised and could no longer support the Proms. Henry Wood found private sponsorship for the 1940 and 1941 seasons and replaced the BBC orchestra with the London Symphony.

The following year air-raids intensified and the season only lasted four weeks. Then on 10 May 1941 the Queen's Hall was bombed. The Royal Albert Hall, became the main Proms venue and remains so today. The BBC resumed sponsorship in 1942.

That’s quite a legacy. And the Proms are still as popular today?

Most definitely. The original aim was to present the widest range of music, performed to the highest standards, to large audiences. And today Proms audiences stretch into the millions.

Listen out during Music Alive on weekday evenings, at 1 pm Thursdays on Upbeat, Saturdays during Sound Lounge, and to Opera on Sunday.

The BBC promises a "summer of unmissible moments", starting with this mash-up performance of Winter from Vivaldi’s Four Seasons, where four young musicians meet four young dancers on the streets of Shoreditch, London, UK.