1.00pm Music from the Movies

JOHN WILLIAMS: Adventures on Earth, from E.T. the Extra-Terrestrial;

SILVESTRI: Suite from Back to the Future;

The Big Sing is the national Secondary Schools' Choral Festival and the Finale is the culmination of months of rehearsing and planning for all involved. This year 10,500 students entered, in 273 choirs from 160 schools around the country.  After regional competitions, 24 secondary school choirs were selected to perform at The Big Sing Finale 2017 at the Aotea Centre in Auckland. The The Big Sing Finale runs over three days and is managed by the New Zealand Choral Federation. (Recorded in Aotea Centre, Auckland by RNZ)

Striking the right balance at The Big Sing 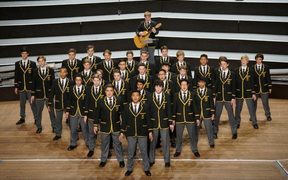 A record 273 choirs from our secondary schools are taking part in The Big Sing festival, and it's up to the adjudicators to ensure every choir has a fair chance of progressing through to the finals… Audio