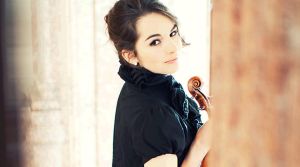 “Alina Pogostkina’s playing of the opening movement of Sibelius’s Violin Concerto was exceptional… The bravura passages in the finale were crisply played with nothing rushed or merely sketched.” (The Birmingham Post, February 2009)

Alina Pogostkina was the winner of the 2005 Sibelius Competition, since then she has been performing at some of the world’s most renowned festivals and venues. Alina Pogostkina is soloist in Mozart’s rarely-performed Violin Concerto No.7, K.271a, with the WDR Sinfonieorchester Köln conducted by Reinhard Goebe. Earlier this season Pogostkina and Goebel collaborated on performances of Mozart’s Violin Concerti Nos. 1-6, in concerts with the Tapiola Sinfonietta.
Text courtesy of Harrison Parrott