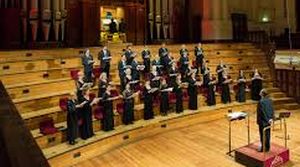 “It is important to remember”, writes the conductor, Indra Hughes, “that a great deal of Spanish music was performed in Mexico, much of it (like the famous Victoria Requiem) within months of its composition.”

The concert begins with with a Mass, “Missa Ego flos campi” (I am the flower of the field) by Juan Gutiérra de Padilla. He was born in Málaga in Andalucia in the Southern Spain around 1590. He became Maestro di Capella (Director of Music) at the small cathedral in Jérez de la Frontera and then moved to the much larger and important cathedral at Cádiz. Around the age of 30 he emigrated to Mexico – surely at the time, Indra Hughes writes “a brave and ambitious thing to do.”

“He became maestro at the magnificent and lavishly-decorated cathedral in Puebla de los Angeles, in a city that, even though largely still under construction at the time, was the second most important in Mexico. Here Padilla presided over the finest choir in Nueva Espaňa – 14 boys, 28 men and teams of organists, harpists, bajonistas and violin-players.” (Source: Indra Hughes, Musica Sacra)