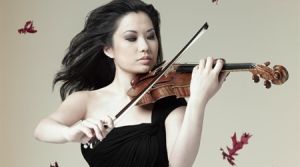 Still buzzing from Janine Jansen? It’s also superstar Sarah Chang’s first visit to New Zealand. This time we have the Auckland Philharmonia to thank for bringing us another celebrity violinist. Though Jansen and the Tchaikovsky will be a hard act to follow.

American-born Sarah Chang is playing the Dvořák violin concerto which she’s had a long and, we hope, fruitful relationship with, if one early review is to be taken seriously. Back in 2004, a Seen and Heard International critic was scathing about her BBC Proms performance of it with an orchestra from the composer’s homeland, the Czech Philharmonic. “Sarah Chang played with great energy and attack. Unfortunately, Dvořák did not survive this brutal assault and neither did Chang's bow... all three movements were played in the same heavy-handed manner with Chang grotesquely savaging her 1717 Guarneri del Gesù...” The reviewer’s own assault goes on at some length, as he throws up words like “turgid,” “brash” and “ignorant,” before reaching the conclusion: “pretty red dress, shame about the concerto.”

Luckily, we have a counterbalance in the form of reputable classical review mainstay, Gramophone magazine. Chang’s recording of the same concerto, made about the same time, with a different orchestra and conductor, is deemed to be “an outstanding account” and a “warm, powerful reading.” Go figure! She’s more than ten years older than both these reviews now – so it will be interesting to hear what she does with it. Especially with yet another conductor and orchestra.

In charge of the Aucklanders tonight, on a return visit from Poland, is the Krakow Philharmonic’s Principal Conductor and Artistic Director, Michał Dworzyński.

He’ll no doubt bring some Eastern European flair to the Dvořák, which is preceded by a rustic favourite from the same country, Smetana’s overture to The Bartered Bride. We’ll also hear Bizet’s irresistible music from Carmen (yes, a few listeners take exception, we know!) and Ravel’s equally compelling Boléro (ditto!)