Banned by the Nazis 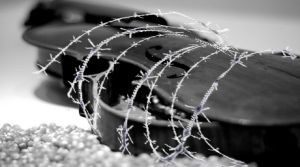 Donald Maurice and Inbal Megiddo, New Zealand School of Music tutors, explained before the conference in Upbeat how their desire grew to bring some of this forgotten forbidden music back to life, after Israeli-born Inbal joined the staff a few years ago.

The result is a unique chance, tonight, to hear music never played in this country before, including a world première of The Jewish Fate, written nearly 80 years ago, by German-Jewish composer Richard Fuchs who emigrated to New Zealand in 1938.

Maurice and Megiddo also explain what a slow process it’s been, discovering music that in some cases was written in a concentration camp. Viktor Ullman’s opera, Emperor of Atlantis, is a case in point. It was a satire on Hitler, written in a concentration camp but shut down when the German guards realised what it was about. It was later smuggled out to England after the composer had died at the very end of the World War II.

Cellist Inbal Megiddo will play a cello concerto by Polish-born Jew Mieczyslaw Weinberg whose music has been described as “Shostakovich with a Jewish accent.” She describes it as a “fantastic work” that’s just been rediscovered in the last few years.