Sophie Wilson presents a collection of conversations and recordings from her time at the Eurovision Song Contest, held this year in Baku, Azerbaijan.

We encounter colourful souvenirs of Sophie’s week there, including an Icelandic broadcaster, a local taxi driver, a Swedish songwriter, a complex network of international fans, and the indispensable knowledge of Roy van der Merwe - the President of Eurovision's biggest fan club who has attended Eurovision nearly every year since 1983 from South Africa. (RNZ) 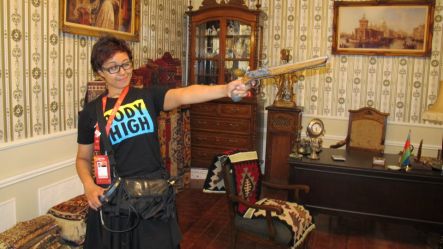 Sophie Wilson in an antique shop at the İçəri Şəhər (Old City) of Baku... taking a cavalier attitude to radio production.

Garmisch-Partenkirchen, Bavaria, 1945. American soldiers are going house to house, arresting Nazi officials and party members. Now an elderly gentleman comes to his door, greeting the fresh-faced liberators with the words "I am Richard Strauss, the composer of Rosenkavalier and Salome." Thomas Goss looks at the last years of the composer’s life (RNZ)