Oceanographers have spent this week east of the Kermadec Trench to test two new high-tech glass balls that will help them understand the role of the deep ocean in the world’s climate. 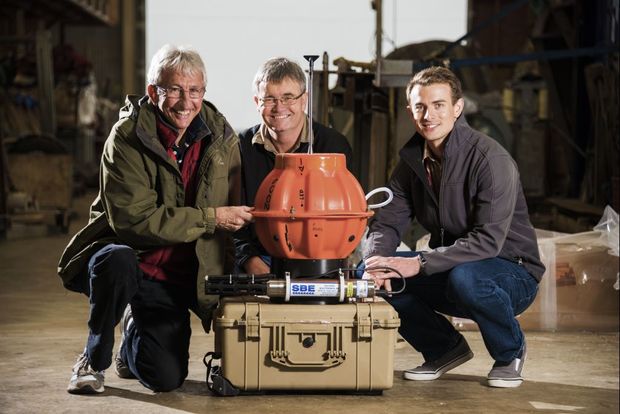 NIWA’s research vessel Tangaroa has deployed two plastic-encased balls, which have plunged 5500 metres down and then climbed back to the surface, measuring temperature and salinity along the way and beaming the data and their position back via satellite.

Voyage leader and NIWA oceanographer Phil Sutton says the deep-diving floats are an extension of the existing global ocean monitoring project called Argo, which has already distributed 3500 cylinder-shaped floats (pictured on the right) throughout the world’s oceans. These original floats sink to 1000 metres, where they drift with ocean currents for 10 days before descending further to 2000 metres. They also collect temperature and salinity measurements along the way, which allow scientists to track changes in the heat content and currents in the ocean.

He says the Argo project has already revolutionised our understanding of how the oceans are responding to a warming climate.

“Before Argo there was very little data for large parts of the world, in particular the Southern Ocean. There is 15 times more data in the Argo period, in the last 10 years, than all of the data ever collected before Argo started.”

The new floats are ball-shaped because they have to withstand more pressure at depth. But they are also equipped with advanced sensors to track temperature and salinity, and they carry an antenna to connect to a satellite.

Dean Roemmich, an oceanographer at the Scripps Institution of Oceanography in San Diego and one of the original designers of the Argo programme, says the deep-ocean project is an important next step because more than half of the world’s ocean is deeper than 2000 metres.

He says the Argo project has already confirmed that the oceans are warming at depth, and that that warming signal is particularly pronounced in the Southern Hemisphere.

“The surface of the ocean has not actually warmed [in the last 10 years], and there’s been a lot of coverage over the socalled pause. It’s been explained as inter-annual variability due to more occurrence of La Niňa, less El Niňo – but the short story is that the surface temperature of the ocean is highly variable.

“Whereas when you start looking at the heat content, the average temperature of the ocean down to 2000 metres, rather than seeing a pause we’ve seen a steady warming continue at the same rate for the last 50 years.

The other significant finding is that the salinity of the world’s oceans has changed. “The salty parts of the oceans, the subtropical oceans, are getting saltier, whereas the fresh parts under the intertropical convergence zone and in high latitudes, those are getting fresher. The underlying message of that change is that the contrast between evaporation and precipitation is increasing, and the water cycle of the Earth is being intensified.”

Dean Roemmich says the oceans have so far buffered us from some impacts of climate change because they have taken up 93 per cent of the excess heat.

Following the successful mission, the team plans to be back next year to deploy more deep-diving Argo floats in the south-west Pacific.

Fish with chips. We speak to Maurizio Porfiri from the Polytechnic Institute of New York University about the robotic fish leading schools of fish away from ecological disasters and maybe one day straight into a fishing net! Andy Bowen, project manager and principal developer of Nereus, a robot submarine that has reached the deepest-known part of the ocean.