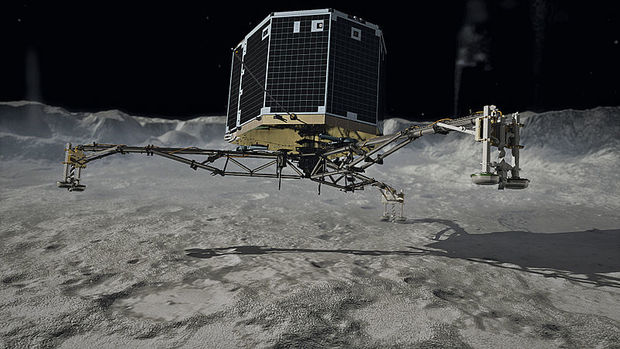 After a 64 billion kilometer journey a robotic space probe has landed on a comet for the first time in history.

The Philae probe touched down on comet 67P last night to the jubilation of mission controllers at the European Space Agency, who launched the probe on board the Rosetta spacecraft more than ten years ago. But the excitement has been tempered by the news harpoons meant to secure Philae to the comet have failed to fire. There have been fears the Philae may have bounced off the surface.

Robotic spacecraft makes history by landing on a comet

A 3D model of the Rosetts Spacecraft.

The Rosetta space craft has been travelling for ten years to reach its rendezvous with comet 67P.

Overnight, a small lander was released to land on the comet.

We speak to Dr Matt Taylor - project scientist on the Rosetta Mission - about the historic project and how the landing is progressing.

The first humanoid robot in space has finally awakened. Its called Robonaut and NASA has turned it on for the first time since it was delivered to the International Space Station in February.