Helen developed the toy as part of her Masters in Psychology at Victoria University with the aim of helping children on the autistic spectrum to develop positive play behaviours. These children can find it difficult to understand social behaviours and have troubles interacting in ways that other children can relate to. 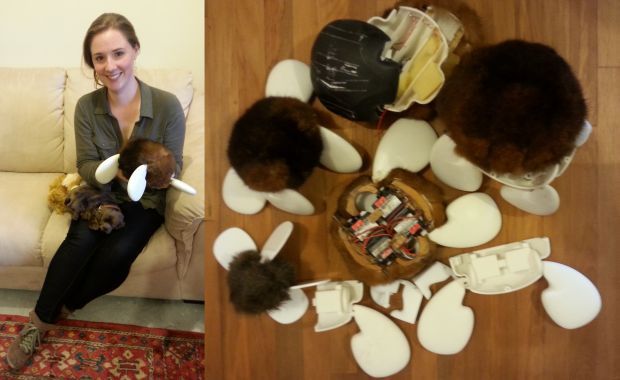 Helen Andreae with Auti and different protoypes of the toy (image: R. Beran)

Auti is a round ball containing servos and accelerometers covered in possum fur with four, smooth, white paddle legs which can respond when a child is talking rather than shouting, or patting and stroking rather than throwing Auti around. Auti’s legs can move in different ways so he can walk, sit and stand, and wave. The idea is that if the child is gentle with Auti - talking and patting – the toy will respond with various engaging movements, but if the child is rough or shouts, Auti will pull in and shut down.

“What we did in the trial that we just ran is compare this fully interactive Auti with an Auti that just moved but it didn’t respond to your movements…and what we found is that children with the interactive one, the full version, talked a lot more, children with the active, none of them talked to it,” says Helen.

“They were seeing Auti differently to an animal, although not to a statistically significant level,” says Helen.

There are plans to commercialise Auti, but until then the toy cannot be purchased, however there will be more trials of the toy in the next five or six months, for more information contact Helen. Mechatronics is multi-disciplinary engineering. Originally combining mechanical and electronical engineering – hence the name – computer engineering now plays a significant role as well. An example of a mechatronics system is an industrial robot.

Shengquan (Shane) Xie heads the Medical and Rehabilitation Robotics Research Group in the Department of Mechanical Engineering at the University of Auckland.

Research fellow Andrew McDaid uses mechatronics to design wearable medical devices that can assist in gait rehabilitation for people who have had a stroke or who have incomplete spinal cord injuries. He has developed the prototype of a leg rehabilitation exoskeleton that uses air muscles to move the device, and he hopes to have it in clinical trials within a few months.

PhD student James Pau is developing a neuromuscular interface that intercepts and interprets tiny muscular movements that can be used to move a device.

The group is also working on detecting brain signals that have the intention of moving muscles, with the idea that in future these might help control an exoskeleton or even a wheelchair – at the moment the group report they can send a message on a mobile phone without actually touching the phone but by detecting electrical signals from the brain. 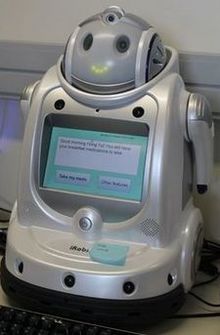 The world's first multi-robotic study is taking place at an Auckland retirement village this month, involving 31 robots, 100 residents and 100 staff.

The Healthbots project is being run by Auckland University and a cluster of South Korean companies.

The aim is to make robots that can help older people and their caregivers.

In this web only extended interview, Catherine Mohr continues to discuss the Da Vinci surgical robot.

New Zealand-born Catherine Mohr is the Director of Medical Research at Intuitive Surgical, a US company which developed the Da Vinci surgical robot. This robot stands on one side of the patient's bed while the surgeon looks down at a 3D console and can manipulate the robot's strong, wristed arms with special controllers.

The Da Vinci robot is used for minimally invasive, laproscopic (or keyhole) surgery. Laparoscopic surgery provides better outcomes for the patient because it uses small incisions but is often limited to very simple procedures. The Da Vinci robot can provide an alternative to traditional open surgery (with a large incision) or enables a broader range of laproscopic surgical procedures.

Catherine Mohr travels to New Zealand regularly, and spoke at the Running Hot Conference in 2009.

Ruth Beran catches up with Catherine Mohr in Auckland to find out more about the Da Vinci Robot. 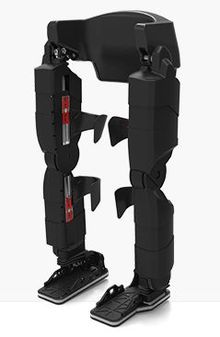 Richard Little is founder & chief technology officer at  New Zealand company Rex Bionics, inventors of Rex, an exoskeleton in the form of a pair of robotic legs that enables the user to stand up and walk with their arms free.

Rex was designed to give another form of mobility to disabled users.

Inspired by Isaac Asimov's science fiction classic, Fantastic Voyage, researchers at Monash University are developing technology for a free-swimming microrobot, smaller than a millimetre in diameter, designed to be injected into the human body.

The robot will eventually be able to record images or perform surgery in blood vessels that are far too small to reach with a catheter.