When We Wake by Karen Healey

"My name is Tegan Oglietti, and on the last day of my first lifetime, I was so, so happy."

Sixteen-year-old Tegan is just like every other girl living in 2027 – she’s happiest when playing the guitar, she’s falling in love for the first time, and she’s joining her friends to protest the wrongs of the world: environmental collapse, social discrimination, and political injustice.

But on what should have been the best day of Tegan’s life, she dies–and wakes up a hundred years in the future, locked in a government facility with no idea what happened.

Tegan is the first government guinea pig to be cryonically frozen and successfully revived, which makes her an instant celebrity–even though all she wants to do is try to rebuild some semblance of a normal life. But the future isn’t all she hoped it would be, and when appalling secrets come to light, Tegan must make a choice: Does she keep her head down and survive, or fight for a better future?

Adapted for RNZ by Owen Scott. 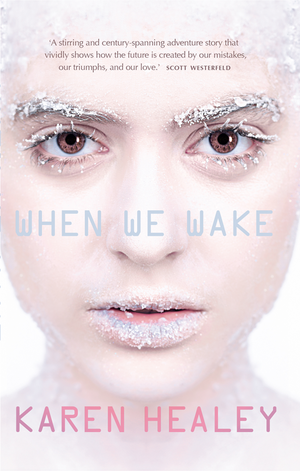 Karen Healey writes books about tough girls with brains and interesting boys with secrets. She likes nail art, superheroes, and musical soundtracks. She technically lives in New Zealand, but really lives on the Internet.

Her previous books include the Aurealis winner and William C. Morris Debut Award finalist Guardian of the Dead and The Shattering.