Frankie Parsons is 12-going-on-old-man: an apparently sensible, talented Year 8 with a rodent voice of worry nibbling in his head where worrying questions steadily gain volume. Are the smoke alarm batteries flat? Does the cat, and therefore the rest of the family, have worms? Will bird flu strike and ruin life as we know it? Is the kidney-shaped spot on his chest actually a galloping cancer?

Most of the significant people in Frankie’s world – his father, his brother Louie and sister Gordana, his eccentric great-aunts, his best friend Gigs – seem gloriously untroubled by worry. Only Ma takes seriously his catalogue of persistent anxieties; only Ma listens patiently to his 10 p.m. queries. But of course, it is Ma who is the cause of the most worrying question of all, the one that Frankie can never bring himself to ask. Why can't she leave the house?

Then the new girl Sydney arrives at school. A tomboy with dreads and a worldly attitude, colourful, creative, talkative Sydney, becomes a firm friend but has relentless, unavoidable questions of her own that force Frankie and his family to face up to things that have lain dormant for years . So begins the unravelling of Frankie Parson’s carefully controlled world and the painful business of fronting up to the ultimate 10 p.m. question. 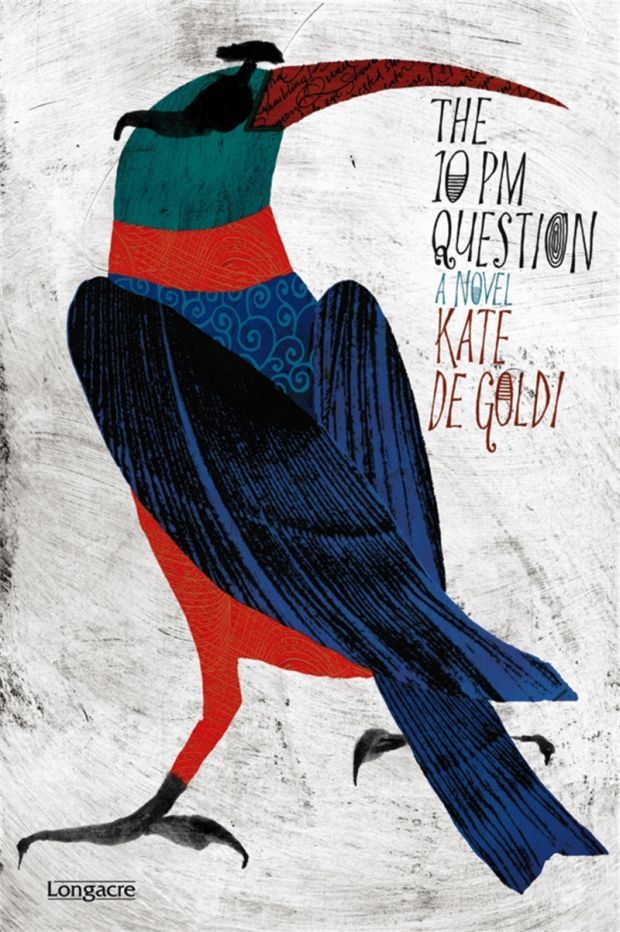 Kate de Goldi lives in Wellington and is the author of several novels for young adults, (including Closed Stranger produced by RNZ some years ago), a collection of short fiction for adults and some picture books for children. She reviews children’s books regularly on Radio New Zealand National’s Saturday programme with broadcaster, Kim Hill. She has won a number of accolades for her fiction, including the Katherine Mansfield Short Story Award and the Esther Glen Medal. Her book Clubs, illustrated by Jacqui Colley, won Book of the Year in the New Zealand Post Children's Book Awards in 2005.

The 10pm Question won the 2009 NZ Post Book Award for the Young Adult category and Book of the Year. In 2001, Kate was made a New Zealand Arts Foundation Laureate.

"I spent four years, on and off, writing this book, but I began thinking about it more than seven years ago when I read about a woman who suffered from an anxiety disorder – a serious agoraphobia, which meant she hadn’t left her home for more than a dozen years. I made a note of that – as I do of myriad things in my daily round, in the world generally – things that intrigue me or tickle my funny bone, or that merely catch my attention for a reason I’m not yet sure of.

(Quite a lot of things in the novel have been gathered this way over the years: I’ve had the name Gordana in a notebook for more than a decade, knowing I’d find a use for it one day. Similarly, I’ve long been fascinated by document destruction trucks on city streets, and I’ve always wanted to call a cat The Fat Controller. Years ago I wrote in my notebook: ‘guy has beagle called Ray Davies...’)

The second important part – of what I think of as the ‘triangulation’ that often gets a novel cranking – was a young woman I met who had experienced a rather peripatetic life with her mother and sisters ... she was only twelve years old, but very smart and wise beyond her years, though uncertain much of the time where she’d next pitch up. I made a note of her, too. Lastly – between the ages (roughly) of eleven and fourteen years my son, Jack, was, from time to time, plagued by anxiety – about many things (the possibility of fire, ant invasions, global warming, earthquakes, the SARS virus, sundry illnesses). I felt a lot of sympathy for this affliction, since I’m a pretty active hypochondriac and general worrier myself...

Often, in the late evening, Jack would come into our bedroom and confess (somewhat indirectly) his most pressing current fear ... we would talk about it, I would try to reassure him etc, etc. After several years of this he was well over himself and would come into the room kind of sheepish and exasperated ... one evening he came through the door and said, in a comically hang-dog voice, ‘It’s the Ten p.m. Question’. At that moment, all the nascent ideas, the notes in my book, everything I was preoccupied with, all came together – they connected up, and the starting point of the story was suddenly clear to me.

I didn’t know much more than that when I began writing (I never do with a novel), but it went from there, and I went along happily for the ride – entertaining myself with many details I’ve been longing to have in stories (a trombone playing friend, a triumvirate of great-aunts, a cake-baking business, the ritual of a long bus trip to school, a Fimo army of lunatic second-lieutenants, a language-focussed teacher, etc., etc. etc.).

Often people ask what one’s book is about. It’s certainly an interesting question to think about after you’ve finished a novel – I’m never entirely clear about all that while I’m actually writing – and I think I can say one or two things about how I see this novel (though I’m sure different readers will have different – and equally valid – interpretations).

At the heart of the story is, I think, Frankie’s need to separate emotionally from his mother. He loves her greatly, and is deeply attached to her; but she also represents a considerable burden to him. The story works around his coming to fully understand this dilemma – his exhaustion with it, his coming to terms with his mother’s ‘half-sad ending’ (she may never leave the house), and his crucial understanding that her ‘ending’ needn’t be his ending. That is, though he is deeply connected to her, he is also significantly different – he can, and will, make different choices.

One way or another I am always preoccupied in my novels with the progress a child or teenage character must make away from the family who have borne and loved him or her. All novels are about growing up, in some way – but children’s and teenage stories are especially about that – and the bittersweet fact of growing up is that we must grow away; in order to gain ourselves we have to – in some profound way – lose some part of what we have loved and felt safe with – or, indeed, troubled by. Of course, the novel is also about the great boon of friendship – friendship with one’s ‘best’ friend (who may offer the considerable benefit of understanding without complicated questioning); friendship with one’s siblings – whose friendship is always the first and therefore the template for every other relationship; friendship with aunts, schoolmates, teachers, and the passing parade of adults we come into contact with and who affect us in countless ways as we grow. Finally – and vitally – friendship with that occasional ‘rare bird’ who may come – sometimes only briefly – into our life and change it forever.

I think maybe, too, a lurking ‘theme’ in The 10 p.m. Question is one of family life as a complicated puzzle. It can be rich, hilarious, educational and enraging, painful, and sometimes tragic (in other words, it’s a perfect microcosm of – and preparation for – life itself). I suppose I hope, too, that any reader of Frankie’s story might come away from the book thinking that this complicated puzzle of family life – and life in general – will never be fully solved, either ... there will be semi-sad and often downright sad endings for some people..."

John Leigh (born 1965) is a well-known actor and comedian in New Zealand. He has had prominent roles in New Zealand TV shows such as Shortland Street, Mercy Peak and Outrageous Fortune. He is also a voice actor, and has lent his vocal talents several times to the Power Rangers. He has also appeared in films including the role of Háma in The Lord of the Rings: The Two Tower. This is his first work for RNZ.