A rare live performance of the far-flung sonic explorers, known for their high volume, textural sound – “a mosaic of radiant frequencies” according to one of their record labels.

This show was captured at the Kings Arms in February 2013. A short time later the trio’s earlier band The Gordons was awarded the inaugural Classic Record Taite Music Prize for the 1980 self-released, self-titled debut.

This performance shows Bailterspace remains a force to be reckoned with.

Recorded and produced by Andre Upston for RNZ National. 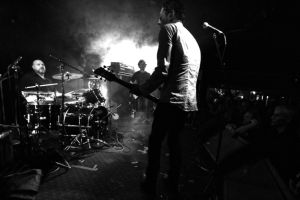