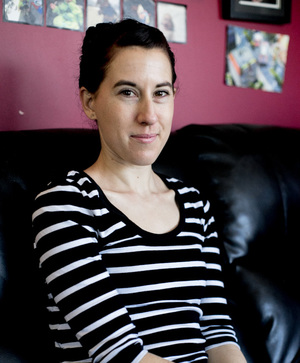 Diagnosis: Diagnosed with antenatal depression in second pregnancy at 16 weeks (2010).

Symptoms: Very low mood. She felt getting pregnant was a big mistake and didn’t want to be pregnant anymore.

"Every single month that I didn’t conceive was really painful and heartbreaking.

So I had these conflicting feelings because there was a part of me that knew that was quite irrational and not really what I truly wanted. It was really confusing. But I was emotional, I was really quite manic, quite up and down.

I made a decision to get some help and that was probably around 15-16 weeks. At that point that I got the diagnosis, [and] after receiving treatment it was a complete turnaround.

Within weeks of being on medication and being in the support network of the maternal mental health services, [I realised] I didn’t have to feel like that, and that is something I’ll remember forever.

In hindsight, I think I probably had suffered from not so much anxiety, but depression in the past but it had gone undiagnosed. I continued on medication and because I had [had] that experience during my pregnancy, I didn’t experience any postnatal depression because I think that I was being well taken care of.

When I think about the way that I felt and those emotions, it still feels quite raw and painful. We recently lost someone to [suicide through] prenatal depression and that has raised a lot of regret and emotion around the fact that I hadn’t talked [more openly] about this.

And maybe not talking about it with my friends and my family [meant] it was harder for me to work through those feelings and move through them.

My biggest regret about this whole experience is that I wasn’t more open about it, and I didn’t talk."