More than the baby blues

Exercise in physical and emotional endurance

In an ideal world, motherhood might look something like the calm, haloed Virgin Mary sitting peacefully with her baby nestled firmly at her bosom. For some women, however — despite their excitement, expectation and elation — pregnancy and post-pregnancy is more akin to an exercise of physical and emotional endurance.

Emily had no idea what was happening to her when overwhelming feelings kicked in during her second pregnancy. At around 5-7 weeks her mood suddenly dropped:she couldn’t sleep, couldn’t keep her food down and found herself physically and emotionally exhausted. She was “utterly, utterly terrified because [I thought] they were going to take my children from me”.

Postnatal depression runs in Emily’s family, and she was aware she might experience it too. But she had never heard of prenatal or antenatal depression, and didn’t expect to encounter debilitating depression during her pregnancy.

“I talked a lot about how I hated being pregnant the first time around, but I just don’t think I made that connection until the second time because it was like a freight train hit me. I thought, ‘I’m losing my mind and this is it; I’m never going to come back from this’.”

Emily thought she was having a fully blown nervous breakdown and - despite having planned the pregnancy and looking forward to having a second child, she fantasised about dying and giving birth early. Her overwhelming thoughts were simple — she wanted the baby out.

The night she told her husband she needed help, she was terrified that a van was going to come and take her away, and worst of all, she was concerned that her children might be taken away from here and her family torn apart.

Her midwife quickly connected her with Maternal Mental Health, and Emily says her only regret is not having done something sooner. She was prescribed antidepressants, and her physical and emotional health returned almost immediately. She quickly regained the capacity to do the everyday activities that had previously confounded her.

“[I remember] my little boy coming home and going straight to the bedroom because he knew mummy would be in bed at 3 in the afternoon. He said, ‘I hope soon you’ll be happy.’ Simply weeks later I was getting out of bed, and that’s hard for me in hindsight.”

Emily would like to see a checklist made available to mothers from early stages of pregnancy, so women have an idea of what to look out for. Otherwise the issue and experience remains largely taboo.

“People want you to be a glowing happy mother,” she says. “If you deviate from that narrative, then I think it’s really challenging for people.” 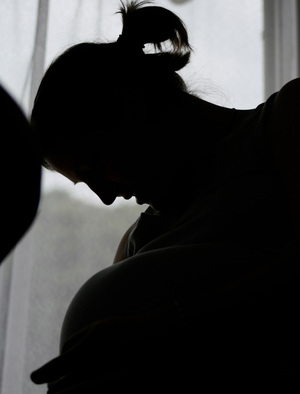 Dr Mark Huthwaite, a senior lecturer at Otago University, has been working in the area of perinatal health for the past 15 years. He suggests the myth of pregnancy as a time of health and happiness may have been perpetuated as a means of ensuring the continued reproduction of our species.

“Keeping quiet about this gave a spurious impression that ‘our society supports and nurtures pregnant women’, which is not true at all, and maybe now we are challenging this and raising the awareness.”

He says Perinatal Mood and Anxiety Disorder (PMAD)—the term now used to describe postnatal and antenatal depression — affects 15-20 percent of all pregnant and postnatal women. And numbers are on the rise, though they vary between different cultures and ethno-social and cultural backgrounds.

But sometimes there are no identifiable triggers.

According to research by Auckland University (see ‘Growing Up in New Zealand’) the risk of depression is three times higher for those who have a history of anxiety before or during pregnancy, with stress also a contributing factor.

The study also reveals that Asian and Maori women are more likely to experience pregnancy-related depression, although at this stage in the research the answers as to why are not yet known.

Antoinette Ben, Executive Director for Post and Antenatal Distress (PND) Wellington, points to UK studies that show 1 in 5 women suffer from perinatal depression and that this number does not account for the women who go undiagnosed. She agrees that antenatal depression isn’t largely talked about, which poses challenges for women who experience it.

Ben has five children of her own and suffered from antenatal and postnatal depression throughout each of her pregnancies.

“My mum had it, I’m pretty sure my grandmother had it. No one can fix it or make it better at the time,” she says. “Sleep was a big trigger for me [and] it didn’t matter how much support I had—I had a fantastic husband, I didn’t really want for anything—but I struggled and found my way through.”

PND see more men seeking help for postnatal depression, but ultimately find it more difficult to deal with it while also trying to care for their partners and a new baby.

“We’re so focused on the mum, the act of giving birth and the feeding [that], we forget about all the other major changes, and those changes affect men too. Dads feel a lot of stuff. They also feel like there’s no way to talk about it and they feel like it’s maybe not important.”

Many men go undiagnosed for postnatal depression, and for women with antenatal depression it’s often confused with expected hormonal changes that occur during pregnancy. The red flags to look out for, says Ben, are continued feelings of anxiety, feeling on edge, and a low mood that extends beyond the baby blues stage (which is around the fourth day post birth).

“The more we can support mums and dads at that time, and let them know it’s okay and quite normal to have those feelings and challenges… the better off their relationships [will be] with each other, [and then the] whole family is better off.”

To read more about Emily’s experience of antenatal depression on her blog: www.emilywrites.co.nz