Dan Slevin makes the case for why Pixar’s Soul might be his favourite film of the year. 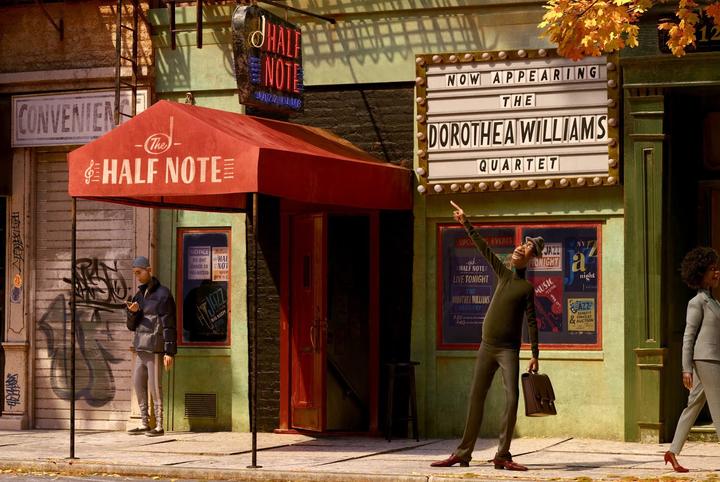 My favourite film of this compromised year is one of the last I’ll see before we shut the door on 2020 for good. (At least it will take a great one in the last two days to displace it!)

Pixar’s Soul was supposed to be in cinemas now but Disney’s Covid release strategy is to direct people’s dollars towards the Disney+ streaming service rather than to struggling cinemas and it dropped for subscribers on Christmas Day.

Soul is the story of a jazz musician named Joe (Jamie Foxx). He’s talented but like so many in New York City, he’s getting by teaching surly teenagers in a high school band rather than wowing grown-ups in clubs. On the verge of giving up his dreams, he gets a surprise opportunity to audition for the great Dorothea Williams (Angela Bassett), finds himself in the zone and nails it!

Rather less fortunately, he remains in the zone on the way home and falls down a manhole and wakes on a stairway to heaven (or somewhere less culturally specific). This particular version of a half-way house afterlife is presided over by several counsellors (including instantly recognisable voice of Richard Ayoade), helpfully explaining how things work and a bean-counting bureaucrat with the voice of New Zealand’s own Rachel House.

Because Joe is determined to get back to Earth and take his big chance (and because he’s not technically dead yet, just on life support) the counsellors decide to attach him to unborn soul number 22 (Tina Fey) as a mentor because she has so far proved completely unwilling to go down and start her own life.

In a terrible mix-up, 22 gets to inhabit Joe’s body and Joe ends up in the emotional support cat that was keeping his comatose body company in hospital. Sound like too much plot? Don’t worry, we’ve got more.

Somehow, our two mismatched chums have to get Joe back in his body by showtime and teach 22 why being alive is so worthwhile so she’ll actually try it.

I’ll say something for the Disney+ presentation, if you have a screen that supports all their bells and whistles (like 4K and DolbyVision) the picture is spectacular. But if you end up watching on a laptop screen (and especially with laptop speakers) your experience may be sub-optimal.

Pixar’s resident genius Pete Docter has made a film about the interior that matches or exceeds the jaw-dropping Inside Out from 2015. In that film, he was interested in the brain and the ways our emotions dictate our behaviour. Here, he’s interested in what happens before (and after) that. And the perfectly reasonable message that our only purpose here on Earth is to continue to exist, savour every moment, be with people.

While Joe is, obviously, an African-American character (Pixar’s first Black lead), Soul is not an African-American story per se, which is why I think Docter is free to imagine it and tell it. For him, Jazz is the way in and it’s the freedom, improvisation and virtuosity of jazz that inspires the vivid visuals. He’s quoting genius throughout – Picasso and Kubrick immediately come to mind – and Soul does a brilliant job of advancing Pixar’s aesthetic, and the artform generally.

Soul is streaming exclusively on Disney+ and is rated and PG. Pixar normally screen a short before their features and, even though it isn’t actually attached to Soul you will get a kick out of their new short Burrow about a young rabbit looking for a place of their own.