Fellini’s 1960 Palme d’Or winner is one of the icons of 20th century cinema and currently 39th (equal with The 400 Blows) in the Sight & Sound Top 50 films of all time, reports Dan Slevin. 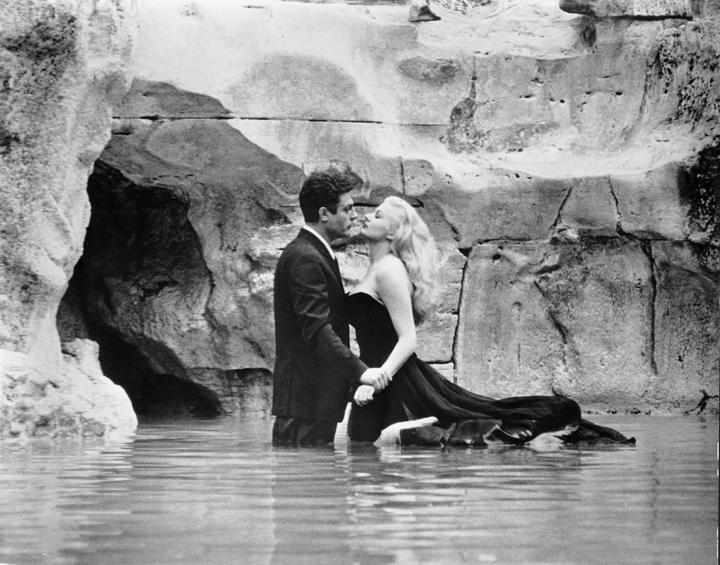 Unlike the last entry in this series, The 400 Blows, La dolce vita is best known with its original Italian title. I’m not sure why this is. Looking at other films in the Sight & Sound Top 50, some are known by their English translated title (The Bicycle Thieves, The Battle of Algiers) and some by their original local titles (Ugetsu Monogatari rather than “Tales of the Pale and Silvery Moon after the Rain” or Au Hasard Balthazar instead of “Balthazar at Random”). If anyone knows whether there is a rule around this, please let me know.

La dolce vita is indeed a better representation of the sardonic intent behind Fellini’s film than the dreary English translation, “The Good Life”. I had seen this once before, while I was in high school, which means that I was duly impressed by the famous set pieces of the statue of Christ flown by helicopter over the Rome rooftops and Anita Ekberg splashing around the Trevi fountain but it has taken until middle-age for me to really appreciate it.

The incomparable Marcello Mastroianni plays Marcello, a jaded Rome society journalist, assigned to follow Swedish movie star and bombshell Ekberg around as she prepares to make a film in the eternal city. Over an episodic week (plus epilogue) we experience the two sides of post-war Europe – the ‘good life’ of an economic and social boom, relief at having survived at all, but also the emotional and spiritual emptiness that goes with survivor guilt and a culture built on fame, trivia and easy gratification.

Marcello is looking for love and cannot find it. He is looking in all the wrong places, as you might expect, but he’s also expecting it from people who don’t really have it to give. In a series of what you might describe as satirical (and often surreal) episodes Marcello observes absurdity, miscommunication, selfishness and trauma – some of it his own – and the film gently echoes this observation with the help of stunning black and white cinematography from Otello Martelli.

The film was a huge hit for Fellini, despite – or perhaps because of – the attacks from Italy’s conservatives. The box office success and the Palme d’Or victory at Cannes in 1960 gave him plenty clout and he went on a spirited run of 60s movies that infused Jungian psychology with increasingly vivid – and often surrealistic – projects that were more interested in spiritualism, spirituality and the effect of the interior on the exterior rather than the other way round.

La dolce vita is much darker than I remembered it. Somehow I had thought of it only in terms of that iconography and have been comparing it with other films that appear in old movie montages. It’s a film that still has the power to sit you on your arse.

As one of the more high profile films in this list, it isn’t that hard to find. It’s currently streaming in NZ on Amazon’s Prime service, renting on demand from YouTube and you can find physical copies at the finest remaining rental stores and public libraries. The Umbrella Entertainment Blu-ray is currently out of print but you might be able to find a copy second hand.