MEAT ON OUR TABLES BUT NOT ON OUR WALLS 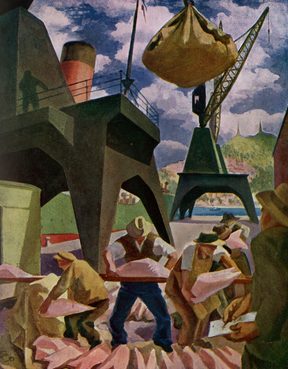 Activity on the Wharf, 1931, by Christopher Perkins Photo: Victoria University of Wellington. All rights reserved.

Although the farming, processing and export of meat has been pivotal to New Zealand history, Victoria University of Wellington art historian Associate Professor Roger Blackley struggles to find it represented in our art.

A rare exception, he says, is what he describes as the “modernist masterpiece” Activity on the Wharf painted in 1931 in Wellington by the English immigrant Christopher Perkins.

The pinkish blocks handled by the watersiders are frozen sheep carcases, encased in their protective mutton cloth. Packed into a huge tarpaulin, these will comprise the next consignment to be plucked up by the crane and hoisted into the steamer’s refrigerated hold. Counterbalancing the looming crane is the observing figure of the tally-clerk on the lower right, who will ensure that none of the British-bound produce suffers inappropriate diversion.

Blackley considers that the painting is good enough to hang in the national collection at Te Papa but it is missing, presumed lost in the London blitz.

In the search for any other representation of meat in New Zealand’s art, he discovered an historical illustration by Samuel Begg, once an Eketahuna-based surveyor but by 1897 (when this image was created) one of the leading artists at the Illustrated London News. 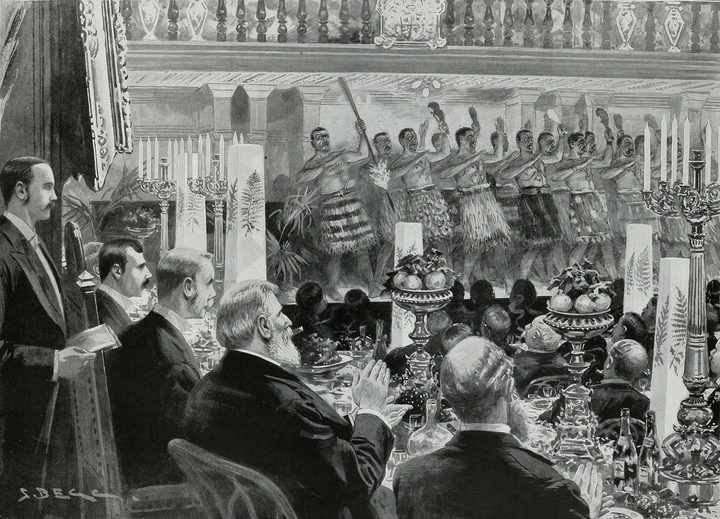 It depicts a promotional banquet in London hosted by the New Zealand meat trade targeting institutional consumers in particular—those who ran hotels, restaurants, hospitals, asylums and schools. Here we see the climactic moments of a feast for 300 guests held at the Holborn Restaurant, when the Maori troopers who were escorting the New Zealand premier Richard John Seddon at Queen Victoria’s Diamond Jubilee performed a rousing haka.

Those who grew tired of the lengthy speeches (Seddon’s clocked in at an hour) could slip into a room adjacent to the dining hall and inspect an array of edible produce from New Zealand, as well as what Blackley describes as “another exhibit of a decidedly less appetising character.” Three preserved tattooed human heads from the collection of General Robley were on display, and a contemporary account notes that ‘the gallant General was in his element explaining to all and sundry the special peculiarities and merits’ of each of them.

What the Māori contingent made of such a flagrant violation of tapu is not known, but when these same young rangatira were hosted by Robley at his exhibition of other preserved Māori heads then showing at the Guildhall Museum and Art Gallery, a journalist recorded that “all of them expressed the wish that the heads should be cared for in New Zealand, and not handled by strangers and women.” It would take more than a century for their wish to be fulfilled as it was only in 2014 when Robley’s collection was returned from New York’s Natural History Museum to Te Papa. 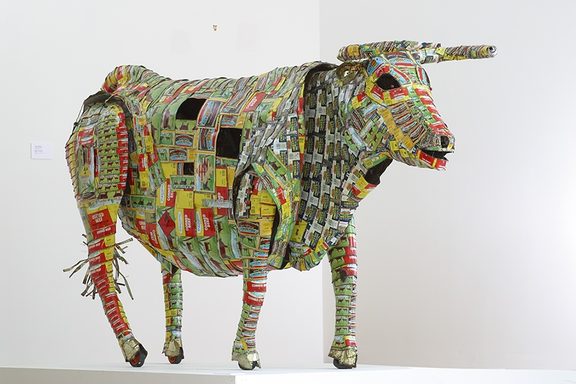 100 years after that promotional banquet in London, Michel Tuffery’s Pi Supo bull sculptures cast the local meat industry in a darker light than the other two images, according to Blackley.

The term Pi supo originally referred to the canned food – literally pea soup – imported by early missionaries in Samoa. Today, pi supo refers to the fat-laden canned corned beef exported from New Zealand – now a mandatory Samoan feasting dish and, together with the infamous mutton flap, considered a major driver of obesity in the islands.

In these sculptures, Blackley says, Tuffery offers us both a critique of food colonialism and beautiful objects crafted from the rubbish that remains from this trade. 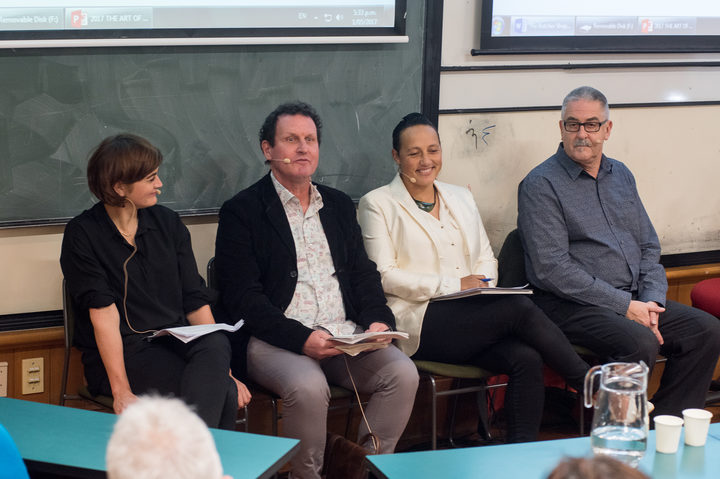 The Butcher Shop series is created by Victoria University of Wellington under its Enriching National Culture theme.

Recent stories from The Butcher Shop