Woman evicted with 3 hours’ notice for being transgender 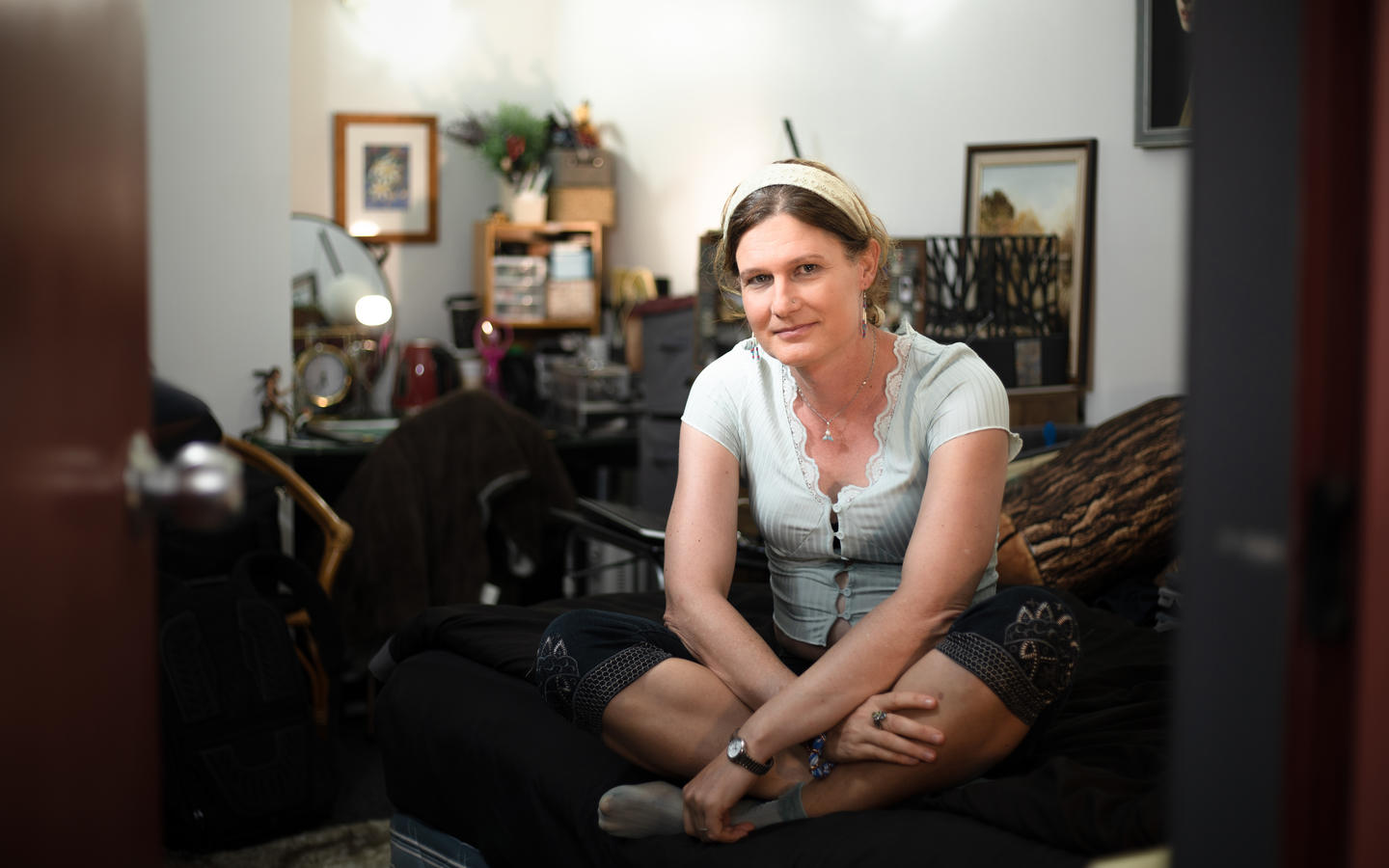 Kristine Ablinger was kicked out of her flat because she is trans. The Human Rights Commission says the homeowner acted within the law.

Warning: This article contains discussion of suicide and other content that may be distressing.

"Final Notice" was the subject line of the email sent to Kristine Ablinger just before 1 o'clock on a Monday afternoon.

It was from her flatmate who owned a three-bedroom house in Auckland's Birkenhead. Kristine rented a small room with a little balcony and a sliver of a sea view. The room felt perfect: cosy and private. A space of Kristine's own, where she would be safe when she began taking hormones.

There was no greeting in the body of the message.

"I think you need to know that William told me that you felt that you had found a safe place to transition and I have to say that this is a BIG issue," it began. "So without being offensive ... I need to honestly let you know that although I don't have issues with transexual transgender etc, in general, I don't want any part of that in my house [sic]."

Kristine was at work when she read the email. As her eyes moved down the screen, prickles of anxiety began to spread down the back of her neck like little pulses of electricity.

It said she had 24 hours to move out.

"I am not your mother and I do not need to be involved in this kind of thing, which is not something I believe in at all", it continued. "I have tried to tolerate it and be supportive because I realise that this is you and who you are. Unfortunately, I don't like it at all. I find it extremely offensive."

Kristine replied, asking for 48 hours to move. "I am not able to get my things out within 24 hours as I am at work and cannot organise to store my things that fast," she wrote.

"Yes, I felt I had a safe place because you told me so. Thank you for giving me a first taste of the discrimination I am going to face for finally trying to find myself and be happy."

At 1.55pm, the landlord replied. "Mike will be there at 5pm today to ensure you move."

Without a tenancy agreement to protect her, Kristine had just over three hours to get home from work and move out.

Discrimination - based on things like sex, marital status, religion, disability and ethnicity - is prohibited in New Zealand under the Human Rights Act. The law's intent is to give equal opportunities and protect people from unfair treatment on the basis of irrelevant personal characteristics.

Although the Act does not explicitly protect people from discrimination based on their gender identity - a lack of protection that has been criticised by the Human Rights Commission and the United Nations - the Commission interprets sex to include gender. And under the Act, it has the power to resolve disputes relating to discrimination.

But there are times when discrimination is perfectly legal, as Kristine discovered, when she lodged a complaint with the Commission about her experience. A homeowner who shares accommodation with their flatmate can discriminate as they please.

She says the law needs to change.

"People are equal, right? Why is there an exception? Why do I lose my human rights when I live with someone who owns the place?"

Kristine knew her landlord before she moved into the Birkenhead house - they were both part of a group that lived at a Buddhist monastery in Auckland. When it was time to move on, the woman had offered to rent Kristine a room.

Soon after moving in, Kristine told her she was trans and even offered to move out if it was an issue. But the woman offered support, a "safe haven", makeup lessons even. She said Kristine could stay as long as she wanted.

But not long after, Kristine says her landlord's behaviour began to change and she spoke about moving to China. Kristine was disappointed, having thought the little room with the balcony would be her home, a safe space where she could live for longer than just a few months. But she accepted that she would eventually need to move on.

It was just days after that conversation that she got the email that described her as being "offensive", as "not something I believe in at all" - like she was an alien, or an ogre.

This means a landlord cannot refuse to rent an empty property to someone because of, say, their ethnicity, sex or religion.

Despite describing the notice period Kristine was given as "ridiculous", he says non-discrimination laws have never covered private interactions. This means a person can choose not to be friends with someone because of their ethnicity, for example, or can advertise a room in their flat for queer people only.

Edgeler says the intention of the exemption is to allow a landlord to rent out a room in the house they live in to a person of their choosing - whether that be a woman, a Muslim person or a single parent.

Because of this, Edgeler says it is important that flatmates have some kind of written agreement, or email exchange, that covers things like a notice period. Then, if a situation where a person is given only hours or even days to move arises, it can be dealt with by the Tenancy Tribunal.

Kristine's landlord did not respond directly to RNZ's requests for comment. But via her lawyer, she said the "facts as alleged are not at all correct".

RNZ has viewed the emails sent by the landlord, and has spoken to a third party who has corroborated Kristine's version of events.

Surveys suggest one in five trans New Zealanders have experienced homelessness at some point in their lives. But University of Auckland homelessness researcher Tycho Vandenburg says the true proportion is likely closer to one in three. Homelessness can mean couch surfing or temporarily sharing someone else's private home, living in a shelter or women's refuge, a boarding house, motor camp, garage, car, caravan or tent. Vandenburg says people in many of those situations don't consider themselves homeless, meaning they're not picked up in surveys or rough sleeping counts. "These kinds of situations are what we call 'invisible homeless', because it is much more out of the public eye."

In a sense Kristine was lucky. With the three hours and five minutes she had to move, she wrangled a friend with a trailer to help get her stuff out of the Birkenhead house.

She describes the move in excruciating detail. "I couldn't breathe, I couldn't think straight... The brain just goes in a storm. Everything moves away. Everything's kind of blurry. I can't focus on anything..." Negative thoughts snowballed. "I thought I'm [worthless]. I don't want to live here. Everybody hates me."

Kristine worries about what might have happened to her on that day if her friend had not been there to calm her down. "Because I had depression for so long, and so intense, suicidal thoughts come pretty quick. And that's just the first thing I said, 'That's it, I'm done. I'm done. I want to end'... I had to take medication to calm down."

Vandenburg says situations like Kristine's are not uncommon. And the impact of housing discrimination reaches far beyond the inconvenience of having to move at short notice.

"These experiences shadow people for years to come, even persisting should they find stable housing." People often get stuck in an "exhausting survival mode", Vandenburg says, whereby they are so anxious and afraid of being pushed out again, they won't unpack their belongings or will avoid decorating a room once they've moved into a new place.

"Obviously, that's not a sustainable way of living in the long term. And it's that kind of thing that leads to ongoing stress, anxiety, depression, even suicide ideation in some cases."

Good quality, affordable and safe housing is a vital element in the support of people with mental health conditions. For Kristine, who has long lived with depression, a home - even just a bedroom - is a safe haven, a place she can be herself with no one watching or judging her.

She spent two nights at her friend's place before moving into a small, but secure room with a private bathroom at a boarding house on the fringes of central Auckland. It's crammed with her belongings; on one side, blankets and cushions cover the bed. Opposite, a rack of clothing is bulbous with dresses and scarves. Shoes are stored neatly behind the door, and tidily stacked plastic storage boxes climb up a wall.

On a small chest of drawers, jammed between her bed and a desk, sits a diorama she's been working on. Small figurines are placed around a gingham covered table, like a scene from The Sopranos - except the patrons are two robots, a pirate, a ginger cat and Han Solo.

Tenants at the house are both short and long term, and living there has mostly been fine for Kristine. "In the first week when I was here, there was a guy on the opposite side who, in the middle of the night, started to trash his room and beat his girlfriend. The police came and they dragged him out while he was screaming. But since then nothing has happened," she says.

"I mean, it's quite dark. So you always need light. But it is kind of cosy and clean and it feels safe enough. And it's very anonymous."

Kristine is creative, friendly, chatty and social. She would prefer to flat with like-minded people. She wonders out loud how a flat interview would work - would she tell them she is trans? It shouldn't matter.

After a short pause, she makes her decision: She's too scared to move in case she finds herself with another transphobic landlord.

This story is part of a new series, Here We Are, about transgender mental health. You can read, hear and view more stories at rnz.co.nz/here-we-are over the next 10 days.

Here We Are was made with the help of the Mental Health Foundation and Like Minds, Like Mine.

Recent stories from HERE WE ARE