Berkelium and the synthetic heavyweights

The periodic table goes all the way to atomic number 118. And the bigger the number, the more electrons an element has – and the heavier it is.

The heaviest chemical elements on the periodic table have only ever existed fleetingly in the lab, so we’ve lumped most of them together in episode 9 of Elemental, with Professor Allan Blackman from AUT. 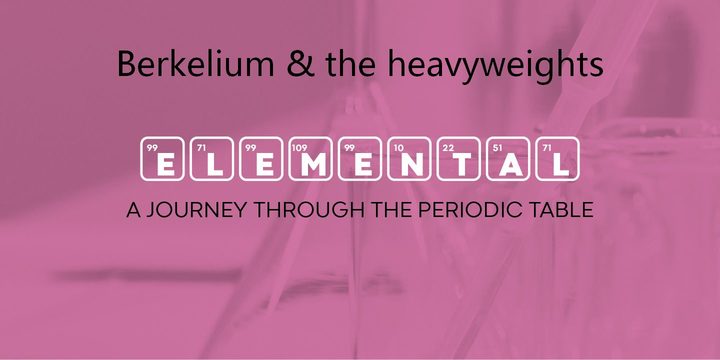 The ‘synthetic heavyweights’ have been created in labs in the US, Russia, Germany and Japan. And the names usually make it clear in which country the element was created.

They are created by the bombardment of elements in a particle accelerator.

Elements 92 and above are known as the transuranic elements – they are all heavy, very unstable and decay radioactively.

The heaviest element found to date is oganesson (chemical symbol Og, atomic number 118). It was discovered in 2002 and its discovery `was formally recognised in 2015.

In 2016, element 118 was named after nuclear physicist Yuri Oganessian, and it’s one of only two elements named after someone who was still alive at the time of naming. The other scientist honoured by an elemental name during his lifetime was the late Glenn Seaborg.

This episode of Elemental includes:

Element 95, americium, got its own Elemental episode, as will curium and meitnerium, uranium and plutonium.