Can abusive men change their behaviour? Simonne visits Jeremy Eparaima a reformed domestic abuser, to find out.  Jeremy was a serial abuser until, in his mid 40’s, he joined a friend on an anger management course and realised that he too needed help. After going through the 20-week course twice he not only changed his behaviour but decided to start publicly speaking out what he did and how not to become like him. He works with the It's Not OK
programme and speaks to groups, including the Police, about his life in a bid to educate them from a perpetrator's perspective.

Simonne visits Jeremy at his family homestead outside Foxton. In their interview Jeremy explains how sexual, physical and emotional abuse at home and school led him to become an abuser himself.  Despite abusing multiple partners he was never arrested, never mind being prosecuted.  He attributes this to a toxic male culture which excuses abuse, especially by those, like him, who have a public profile or play sport.

His abuse was so well hidden that his current partner, who has known him since childhood, initially didn’t know about his past.  After a rocky start, she says, they have now been together happily for eight years.

The episode ends with Simonne following Jeremy to one of his public talks. 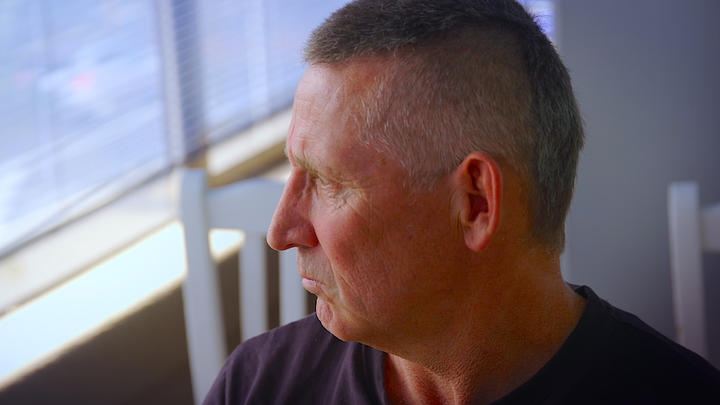 Jeremy Eparaima: "We've got to change our normal."

In the field of domestic abuse Jeremy Eparaima is doing a lot of good these days.  That’s directly because he used to do a lot of harm.  He’s a reformed former perpetrator of violence against those he loved.  Having successfully made radical changes to his own life and behaviours, changes he would never have believed possible, he’s now working hard to help other men realise they too can change.

Growing up in an abusive family environment set Jeremy off along a particular track in life.  He doesn’t share this to excuse his previous abusive behaviour, but rather to help understand and explain where it stemmed from.  He says he grew up angry and aggressive.  His weapons of choice; his words and his fists.  As a young man he used them to keep himself safe.  Later in life he used them to control his partners and children.

Jeremy now sees that his childhood and teenage experiences had failed to adequately equip him to step into adult life.  He’s realised that in the past he simply didn’t have the skills or "tools" he needed to be a loving husband and father.  "Many of us leave home in our teens, early twenties, with only half a tool-belt and the top tool is violence."

Sadly his story is not an isolated one, many share it, which is why Jeremy believes change is needed on a societal level, "We need to change our normal."  He explains that growing up, if there was a family in any particular street that wasn’t abusive they’d be thought of as the goody-goodies.  "But they shouldn’t have been the odd ones out.  They should have been the norm."

Along the way Jeremy had also taken on some common misconceptions around masculinity, believing men needed to be tough, that men never cried or showed emotions other than anger.  He now knows how these beliefs failed him.  But at the time he lacked positive models of what it meant to be an emotionally healthy man.  Even when Jeremy was abusing his family psychologically or physically he knew it didn’t feel right, but he didn’t know how or what to change.  "I loved my family and would have given my life to protect them.  But I didn’t understand that I was the one they needed protecting from."

Help and a chance at change came to Jeremy from an unlikely source.  A particularly aggressive friend started becoming less so.  Jeremy had previously used this friend as what he calls his "minimiser", consoling himself that compared to him he wasn’t really that bad.  When Jeremy asked about the change he’d noticed, his friend invited him to join him on an anger management course.  This made Jeremy angry and he said no!

However the friend kept extending the invitation and one day Jeremy accepted.  He points out there’s an important lesson in this.  If you’re reaching out to help someone, don’t give up.  It’s all about timing and at some point the timing might just be right, that person might be ready to accept help.

So back in 2003 Jeremy did an anger management course.  Then he did the same course all over again.  There he’d met a woman who would change his life for good; the course facilitator.  Still in regular contact to this day, he says, "She was never judgemental but always held me accountable.  I could just be honest with her.  Both perpetrators and victims lose trust."  Jeremy says she would often put in extra hours with him after the sessions just to make sure he had fully understood.  In the end he’d grasped everything so well that she asked him to work alongside her, sharing his story and insights.

For the last 9 years that’s what he’s been doing.  Travelling the country addressing different groups, candidly sharing his story of transformation to show other men that change is possible.  Amongst other things he’s given presentations for the New Zealand police and has played a key role in the "It’s Not Ok" campaign as one of their champions of change.

He’s even changed his full-time job to be able to accommodate this work and is grateful that his new boss values what he’s doing enough to allow him the flexibility he needs.  Jeremy is driven to share his life experience to help make a difference.  "I never thought all that happened to me and all I dealt out would ever amount to anything good, but being given the opportunity to spread my story of change to change another man’s and his family’s future has been the most rewarding thing in my life.  Whether I’m speaking to 10 people or 1000 people, if the light goes on for just one man then it’s worth it for me to do this."

Professionals in the field also recognise how worthwhile his work is.  Teresa Pomeroy, Team Leader for the "It’s Not Ok" campaign run by the Ministry of Social Development, says, “What evidence we have is clear – former perpetrators of violence are one of the most powerful "tools" for mobilising change in other men.  Men like Jeremy, and their families, give so much but we know they are making a significant difference."

Along with everything else, Jeremy’s personal life has also changed radically.  He’s spent eight years in a happy relationship with a partner who also fully supports the work he’s doing.  Jeremy’s proud to say she "has never met the old Jeremy".  While not claiming he doesn’t still get angry, through the personal development work he’s done, facing his past, understanding and fully owning his behaviours, he says he now recognises his own triggers and has the tools he needs to deal with his emotions in a healthy way.  Another big win that’s come from him facing his issues is that, as he felt his generalised anger diminishing, he became aware of other emotions rising.  Today he feels he’s more capable of feeling love, and allowing himself to be loved than ever before.

As for his future contribution to raising awareness around domestic abuse, Jeremy has no plans of slowing up.  He says he hasn’t even questioned when enough will be enough for him because he knows that as a nation we're still so far away from getting to where we need to be.  Until that time, Jeremy’s biggest message; "If you’re a young man about to head down the path of harming your family, get help now.  If you’re an older man, know that it’s never too late to make a change."