Ukraine has started its first war crimes trial since the beginning of Russia's invasion, with a 21-year-old soldier appearing in the dock accused of killing an unarmed civilian. 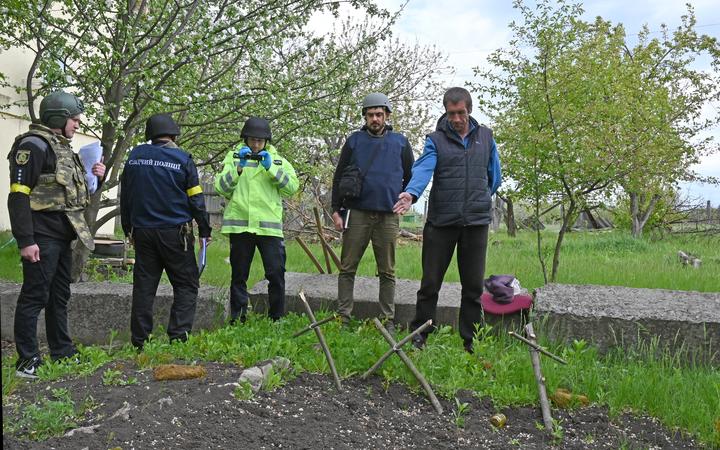 A Ukrainian man shows forensic investigators the grave of three civilians in the yard of a home in the village of Stepanky, near Kharkiv, on Wednesday. Ukrainian officials say evidence is being gathered of crimes by Russian soldiers, and they expect many trials. Photo: AFP

Vadim Shishimarin appeared at a preliminary hearing in Kyiv. He faces life in prison if convicted.

Russia has denied targeting civilians and made no comment on the trial.

Prosecutors said Shishimarin was driving in a stolen vehicle with other soldiers in the north-eastern Sumy region when they encountered a 62-year-old cyclist using a phone.

He was ordered to shoot the civilian to stop them from telling Ukrainian defenders about their location, according to the prosecutors.

It is not clear how he was captured or what the nature of the evidence against him is.

Shishimarin spoke to confirm basic details such as his name. He is yet to enter a plea, and the trial will reconvene next week.

Hundreds of bodies have been found in regions previously occupied by Russia.

Some of Ukraine's allies, such as the UK and US, have joined the country in accusing Russia of carrying out genocide.

After the hearing, state prosecutor Andriy Synyuk told Reuters: "This is the first case today. But soon there will be a lot of these cases."

Ukraine's defence minister has said he hopes to arm a million fighters as the country prepares for a "new, long phase of war".

Oleksiy Reznikov pledged to arm the fighters using new weapons and military equipment the US and other Western countries have been donating to the country over the last couple of weeks. Ukraine was also investing in production facilities to "ensure the stability and frequency of deliveries".

He noted in a Facebook post that Ukraine would "need to meticulously plan resources" and "avoid mistakes" in order to win the war. Already, he said, Russia had suffered a "strategic defeat".

The defence minister said that during the beginning of the war, "volunteers were extremely helpful" and it's thanks to their mobility that they "quickly resolved highly pressing issues".

But before that, Ukraine was "facing extremely difficult weeks ahead".

"Nobody can tell how many. In that period, we will hold the defence primarily with our own resources against the enemy mad with rage," he predicted, in comments translated by BBC Monitoring.

"Increasing pressure of sanctions against Russia and increasing foreign assistance to Ukraine should create, within several months, the conditions under which the Kremlin will finally lose all chances to achieve any success. Then a new window of opportunity will appear for Ukraine," he said.

Reports of Russian losses in Ukraine vary wildly, and are widely thought to have been under-reported by Moscow. Since the start of the war, BBC reporters have been verifying reports of losses among Russian troops fighting in Ukraine by following official announcements, local media reports as well as social media and speaking to the relatives of Russian servicemen.

They have verified the deaths of 2,336 Russian servicemen, and established their names, ranks and military units where they served.

This is nearly twice the latest official figure released by the Russian Defence Ministry in March.

The BBC team said it was likely the real figure of the Russian military in Ukraine is far higher than they had been able to establish. But believed the data analysis helps to see the trends of what is happening.

Nearly 20 percent of all confirmed military casualties are officers - a proportion that had remained unchanged for the past three months. Experts have said Russian officers may have to risk more on the frontline because of persistent problems with communications.

Over 25 percent of all losses are paratroopers and marines. These units are often used in reconnaissance and storming operations. However they often don't get enough operational support and evacuation opportunities for the wounded.

Most of the casualties confirmed by the BBC came from the least developed and economically deprived regions of Russia.

They had only been able to confirm three deaths of servicemen from Moscow, even though the capital makes up almost 9 percent of the Russian population.