Downing Street has apologised to Buckingham Palace for two staff parties in No 10 on the night before Prince Philip's funeral. 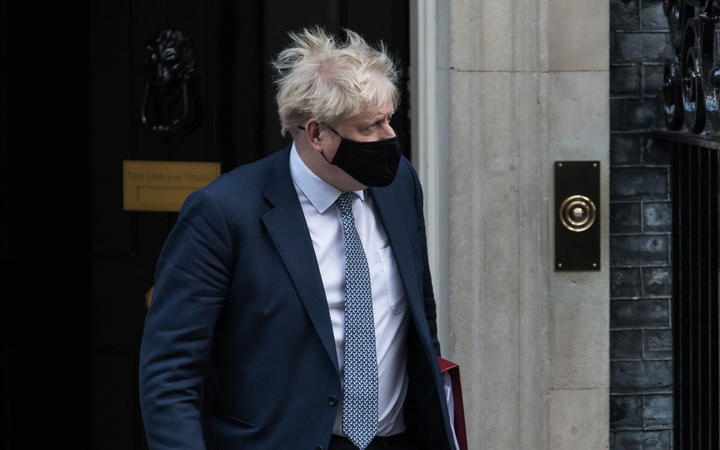 The gatherings, first reported by The Telegraph, took place on 16 April 2021 and went on until the early hours.

The prime minister's spokesman said it was "deeply regrettable that this took place at a time of national mourning".

Boris Johnson was not at either party - but he faces questions over alleged Covid rule-breaking at No 10.

The latest party revelations led to a backlash from opposition parties, who contrasted the behaviour of No 10 staff with pictures of the Queen sitting alone at the Duke of Edinburgh's funeral, due to Covid restrictions.

Labour, the Liberal Democrats and the SNP are all calling for Johnson to resign after he admitted attending a drinks party in the Downing Street garden during lockdown on 20 May 2020.

And Andrew Bridgen has become the fifth Conservative MP to publicly declare they have written to the chairman of the 1922 Committee - which organises Tory leadership contests - to say they have no confidence in the prime minister.

Fifty-four Conservative MPs have to write a letter to trigger a vote.

The Conservative MP said he felt particularly emotional about the party held in the Downing Street garden on 20 May because around that time Covid restrictions had prevented him from being with his wife and twins when they were ill in hospital. The two boys subsequently died shortly after birth.

Opperman said the prime minister should continue in post while the investigation into government gatherings is completed. But he said Johnson needed to "change his ways" and run Downing Street "in a very, very different way".

Meanwhile, the former head of the government's Covid taskforce has apologised for having leaving drinks in the Cabinet Office when she left the civil service on 17 December 2020.

Kate Josephs, who is now the chief executive of Sheffield City Council, said she was "truly sorry" for "the anger that people will feel".

In a statement on Friday, she added that the drinks event would also now form part of the investigation, which is being conducted by senior civil servant Sue Gray.

Sources have confirmed that this was a separate event to a quiz held for the private office of Simon Case, the UK's top civil servant, on the same evening.

They have also been added to the list of gatherings being reported on by Gray.

After No 10 apologised for the events, Labour leader Sir Keir Starmer said: "This shows just how seriously Boris Johnson has degraded the office of prime minister.

"The Conservatives have let Britain down. An apology isn't the only thing the prime minister should be offering the Palace today.

"Boris Johnson should do the decent thing and resign."

Government officials apologised to the Palace in a phone call.

Asked why No 10 had apologised rather than Boris Johnson himself, his spokesman told reporters: "Well, again, the prime minister said earlier misjudgements have been made and it's right people apologise, as the PM did earlier this week."

The spokesman says he could not prejudge Gray's inquiry, but added: "We acknowledge the significant public anger, it was regrettable this took place a time of national mourning."

Liberal Democrat leader Sir Ed Davey called on Johnson to apologise personally to the Queen "for the offence he's caused her and millions around the country mourning for loved ones".

The two parties last April involved around 30 people in total, and are reported to have converged at some point in the Downing Street garden, where they continued past midnight.

Staff were reportedly sent to a nearby shop with a suitcase, that was brought back "filled with bottles of wine".

They were both leaving parties: one for the PM's then director of communications, James Slack, and the other for one of the PM's personal photographers.

Slack, who is now deputy editor of The Sun newspaper, has apologised for the "anger and hurt" caused by the party, and acknowledged it "should not have happened at the time that it did".

At the time, England was under "step two" restrictions that stipulated people could not socialise indoors, except with those from their household or support bubble.

People could socialise outdoors in groups of up to six people or two households.