Exhausted bureaucrats are locked in all-night talks at the COP26 climate summit. 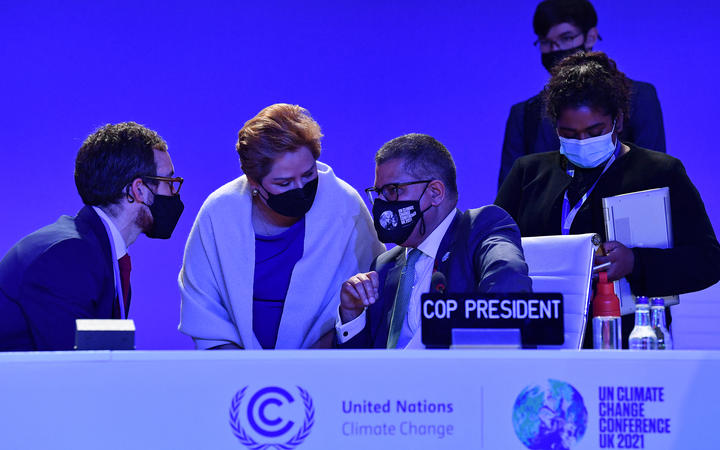 Britain's President for COP26 Alok Sharma speaks with UNFCCC Executive Secretary Patricia Espinosa and other members of his team following an informal stocktaking session at the COP26 Climate Change Conference in Glasgow on 12 November 2021. Photo: AFP

Oil Change International senior campaigner David Tong has been to most COP UN climate meetings in the past decade.

He said almost all blow through deadlines, like this one did earlier this morning, while negotiators and diplomats scrambled to hash out an agreement.

Tong said at this stage of the summit, talks could get very strange.

"And then three hours later, Venezuela voted in favour." 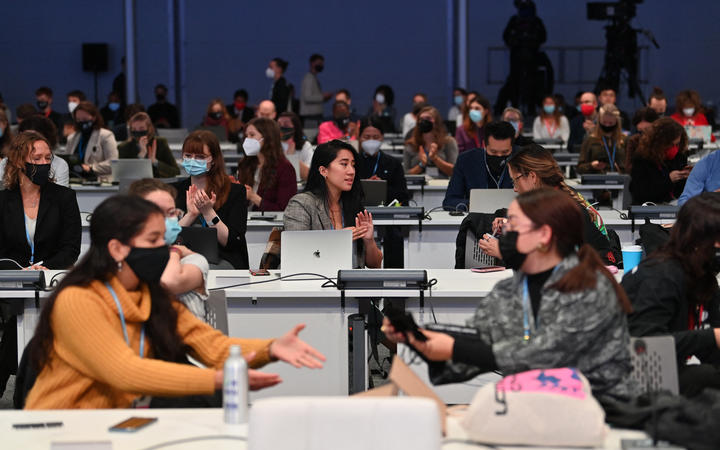 Delegates chat at the People's Plenary during the COP26 on 12 November. Photo: AFP

Venues start closing and cafeterias are dismantled - negotiators subsist on chocolate and fruit.

"In Durban, I was standing in a queue at the last cafeteria that was open behind a man, I don't know where he was from but he must have been French.

"Because when they said that the cafeteria had run out of cheese, he said 'but what am I to have with my wine?!'"

This tweet shows how far past the Friday end-of-business-day deadline previous COPs have gone before an agreement is reached.

Tong said in Madrid in 2019, a comic convention was held in the other half of the conference centre on the last weekend.

"So you had these incredibly tired negotiators and diplomats walking out through full military security to be surrounded by Madrid Spanish comic fans dressed as superheroes.

"It gets incredibly strange."

Back in the negotiation rooms, key diplomats form huddles, while the Presidency (the country hosting the meeting) pulls countries who are at loggerheads behind closed doors to hash it out.

Tong said Climate Minister James Shaw - who is co-leading talks on transparency, essentially how to verify countries are making the emissions cuts or financial contributions they claim - will be scrambling to help the Presidency to get consensus.

He said several negotiators would fall asleep in their chairs.

And there would be lots of empty chairs because negotiators, particularly from poorer countries with smaller teams and fewer resources, had to catch flights home.

"An advisor from one of the Pacific countries told me ... whatever is agreed on the Friday you should stick with on the Saturday.

"Because it only ever gets worse on Saturday because the voices of small countries are no longer represented."

He said while post-deadline sees the compromises struck which allows the final agreement to happen, it almost always leads to worse environmental outcomes than where things stood before the deadline.

"[It is] negotiation by attrition."