At least seven people are reported to have died and some 140 have been hurt after soldiers fired on crowds opposing a military takeover in Sudan. 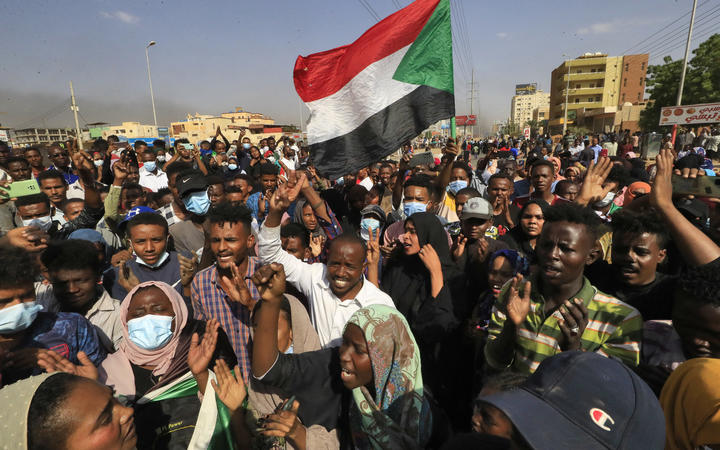 Sudanese protesters lift national flags as they rally on 60th Street in the capital Khartoum, to denounce overnight detentions by the army of government members. Photo: AFP or licensors

Protestors took to the streets after the armed forces dissolved civilian rule, arrested political leaders and called a state of emergency on Monday.

Troops are reported to have been going house to house in the capital Khartoum arresting local protest organisers.

The coup has been condemned around the world, and the US halted $700m in aid.

The leader of the coup, Gen Abdel Fattah Burhan, blamed political infighting for the military action.

Civilian leaders and their military counterparts have been at odds since long-time ruler Omar al-Bashir was overthrown two years ago.

As night fell on Monday, large numbers of protesters were on the streets of Khartoum - and other cities - demanding the return of civilian rule, BBC Arabic's Mohamed Osman reports from the capital.

One wounded protestor told reporters he was shot in the leg by the army outside the military headquarters, while another man described the military firing first stun grenades, then live ammunition.

"Two people died, I saw them with my own eyes," said Al-Tayeb Mohamed Ahmed. Sudan's doctor's union and the information ministry also wrote on Facebook that the fatal shootings had happened outside the military compound.

Pictures from a hospital in the city showed people with bloodied clothing and various injuries.

The BBC correspondent says that despite the violence, the protests show few signs of easing.

Demonstrators have blocked roads with piles of bricks and burning tyres. Many women are also taking part, shouting "no to military rule".

The city's airport is closed and international flights are suspended. The internet and most phone lines are also down.

Central Bank staff have reportedly gone on strike and across the country, doctors are said to be refusing to work in military run hospitals except in emergencies.

World leaders have reacted with alarm at news of the military takeover.

The US has joined the UK, EU, UN and African Union, of which Sudan is a member, in demanding the release of political leaders who are now under house arrest in unknown locations.

Among them are Prime Minister Abdalla Hamdok and his wife, along with members of his cabinet and other civilian leaders.

Our correspondent said a special security unit of the military went to the prime minister's home early on Monday morning, and tried to persuade Hamdok to agree to the coup, but he refused.

Sudan has been in a fractious power sharing agreement between civilian and military leaders since long-time ruler Omar al-Bashir was overthrown in 2019.

The agreement is designed to steer Sudan towards democracy, but it has been a tumultuous ride with a number of previous coup attempts, the last being just over a month ago.

Gen Abdel Fattah Burhan, who was head of the power sharing agreement, but is now leading the latest coup, has said the take over was needed to "rectify the revolution's course" because of political infighting.

He said Sudan was still committed to the transition to civilian rule, with elections planned for July 2023, but protesters have not accepted his reasoning.