For many South Koreans, the homegrown Netflix series has captured long-held anxieties and brought them to life on screen.

With its technicolour sets, outlandish plot and wild costumes, Squid Game might seem like just another dystopian fantasy set in the same fictional universe as The Hunger Games. 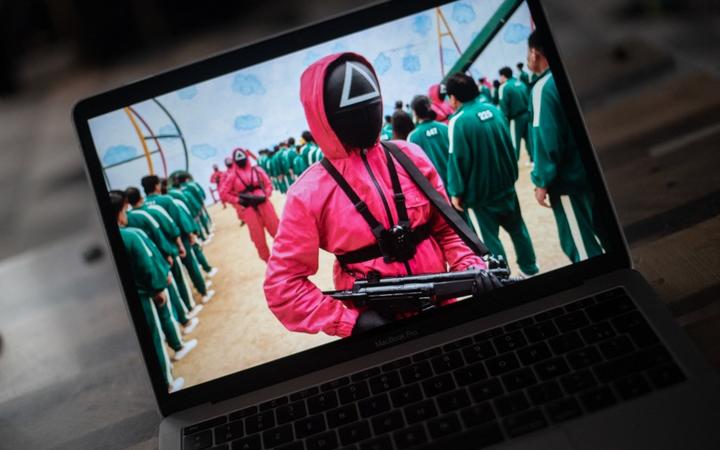 The nine-part series follows a group of desperately indebted Koreans who agree to compete to the death for a cash prize.

The game is watched by shadowy, jaded billionaires who place bets on which contestant will win.

Since it was released worldwide in September, Squid Game has smashed records to become Netflix's most viewed show in its history.

But for many South Koreans, the homegrown Netflix series is not just riveting entertainment.

Behind the violence and horror, it has captured long-held anxieties and brought them to life on screen.

It has also sparked a debate in South Korea about the exploding personal debt and widening inequality consuming this nation.

Squid Game's plot, which pits the downtrodden against each other as entertainment for the rich is the perfect allegory for modern Korean society, according to Sung-Ae Lee. 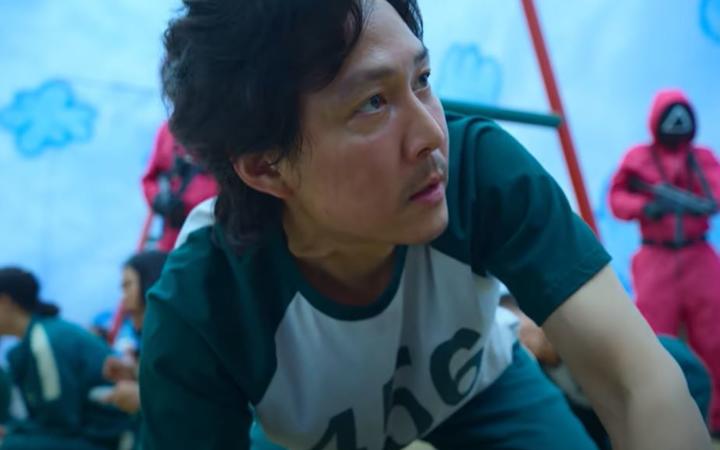 Many Koreans are drowning in debt

The economic transformation of South Korea since 1953 is astonishing.

From the brutality of Japanese colonial rule and then the devastation of the fratricidal Korean war, the country is now the 10th largest economy in the world.

It's been heralded as one of the great success stories of development and experts study Korea's rise to see what can be learned by those countries that are yet made the transition.

However, that economic boom has not come without cost.

While some Koreans amass breathtaking wealth, there is great resentment in the country from those who feel like they've been left behind.

The working underclass of Korea complain about the conditions under which they toil.

Unions claim many are being literally worked to death.

In Squid Game, the recurring motivation of the characters is being burdened by mountains of debt and feeling like they don't have any way out of it.

For Koreans, this sense of desperation as debt threatens to consume them hit a nerve.

Household debt in South Korea has skyrocketed in recent years.

It is now above 100 per cent of its gross domestic product, which means South Koreans owe as much as the entire country produces each year.

As debt balloons, there is a growing percentage of the population who exist in a financially perilous position.

"[And it's] not only income inequality but also asset inequality that is increasing."

So how did Korea get into this financial mess? 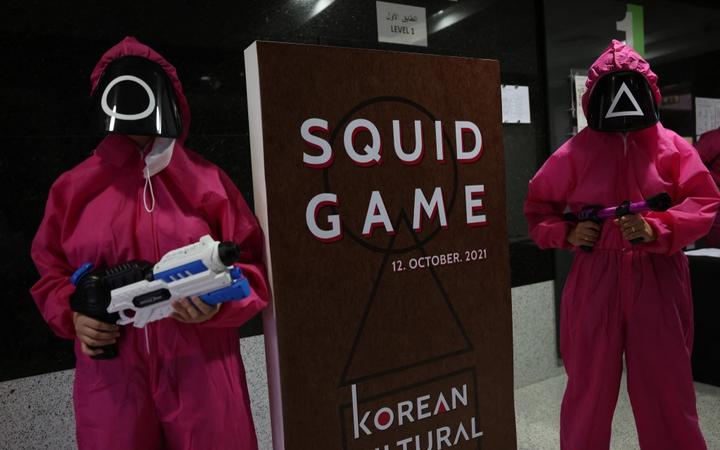 Participants take part in an event where they play the games of Netflix smash hit "Squid Game" at the Korean Cultural Centre in Abu Dhabi, on October 12, 2021. Photo: AFP or licensors

The dangers of climbing the property ladder

It's no coincidence that the writers of Squid Game ensured that most of the participants in the brutal game are aged in their 20s and 30s.

This is the demographic that carries the most debt relative to their income in South Korea.

Many of them are borrowing huge amounts because they're desperately trying to get into a housing market that makes Australia's look sane.

The South Korean Government has attempted to curb the dangerous borrowing.

But by clamping down on loans through the major institutions, they risk fuelling shadow banking that sits outside regulation.

This comes with increased risks for the borrowers particularly if they turn to loan sharks as depicted in Squid Game.

"There might be some violence and some other abuse," Professor Choi said.

Fear of loan sharks has become a key plot line in Korean dramas and films.

The Oscar-winning Korean movie Parasite showed one character going to extraordinarily lengths to hide from his debt collectors.

But even without the threat of direct violence, the burden of debt hangs heavy on the shoulders of many people.

South Korea has one of the highest rates of suicide in the world and experts say the key trigger for many people to take their lives is overwhelming debt. 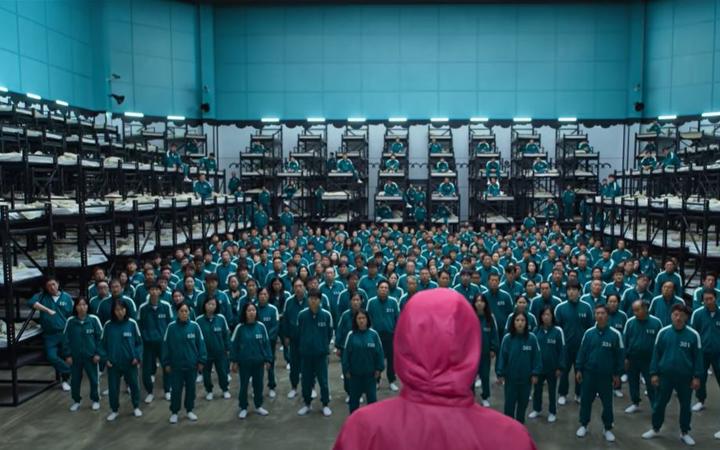 One of the key themes of Squid Game is how impossible it is for a Korean to escape the social circumstances of their birth.

Those who go to the right schools swiftly climb the ladder, while those who can't afford it are left behind.

One character, Sang-woo, is constantly praised because he graduated from Seoul National University.

And while it was lost in translation for those reading English subtitles, Mi-nyeo laments that she never got a chance to study despite being highly intelligent.

The show reflects the huge division between the wealthy and downtrodden in South Korea.

"Young people are increasingly complaining about this lack of social mobility in society," Professor Choi said.

In South Korea, he explained, they call it "sticky ceilings and a sticky floor".

With so few jobs available, young Koreans try to give themselves an edge by competing for a slot at the nation's best universities.

"Graduation usually leads to one of a coveted small number of jobs with an excessively high income," Professor Choi said.

"In an unfairly structured labour market there is only one way to survive: Gain admission to a prestigious university."

But access is limited to only the highest performing students, so parents spend large amounts of cash on tutoring to push them to the head of the pack. 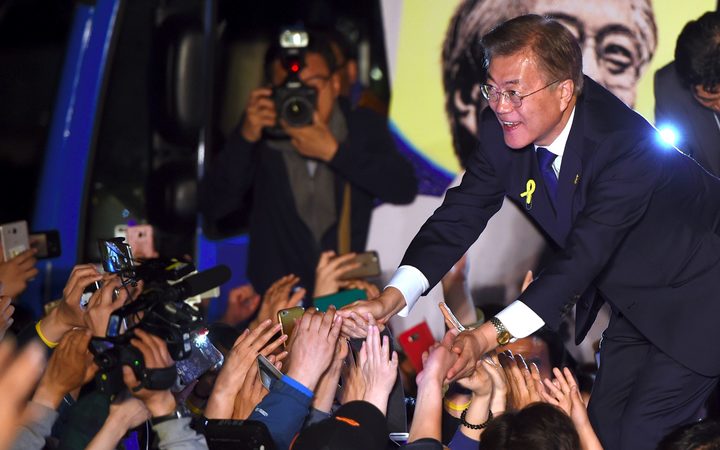 Will Squid Game impact the election?

Squid Game's debut and global domination comes as the race for the South Korean presidency heats up.

President Moon Jae-In was elected five years ago on a platform of improving working conditions for lower and middle income people and cooling the housing market.

Although he has delivered on some of his promises, critics say he hasn't done nearly enough. House prices have continued to surge and with them, debt levels.

His party's candidate Lee Jae-myung is now promising, if elected, he would fight for a universal basic income for every Korean.

"Real freedom is possible only when basic life conditions are guaranteed in all areas including income, housing and financing," Mr Lee said.

"This should be a country where unfairness and inequality are resolved and there are abundant opportunities and dreams."