New South Wales has announced a record high total of 1288 new Covid-19 cases in the community and another seven deaths. 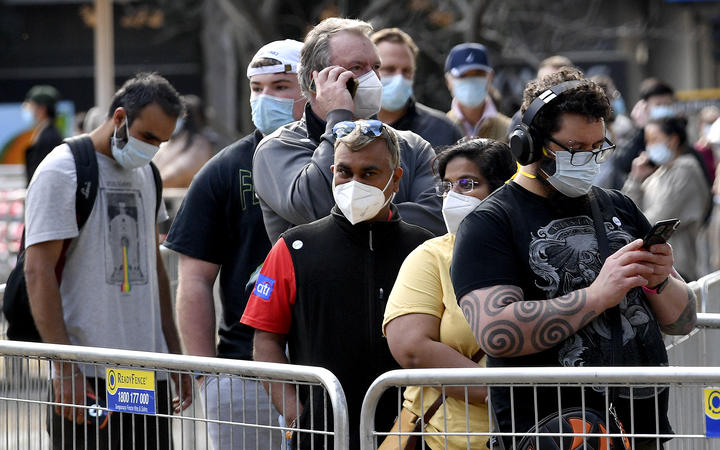 People wait in a queue for their Covid-19 coronavirus vaccination in Sydney. Photo: AFP

It brings the Delta outbreak's total fatalities in the state to 107.

Yesterday the state had 1116 new community cases and four more deaths from the virus.

NSW has now passed the 7 million mark for first doses of the Covid-19 vaccine.

It has hit a 70 percent first-dose vaccination rate becoming the first state/ territory in Australia to do so.

There were 121,000 people vaccinated in the state yesterday.

From 5am tomorrow exercise will no longer be limited to one hour for those who live in Sydney's local government areas (LGAs) of concern.

The 9pm to 5am curfew will still apply, but exercise is unlimited outside of those hours.

Victoria has recorded 176 new locally acquired Covid-19 infections, a day after the premier conceded driving the state's Delta outbreak down to zero was no longer possible.

Health authorities say more information will be provided later about the number of cases who were in quarantine while infectious. 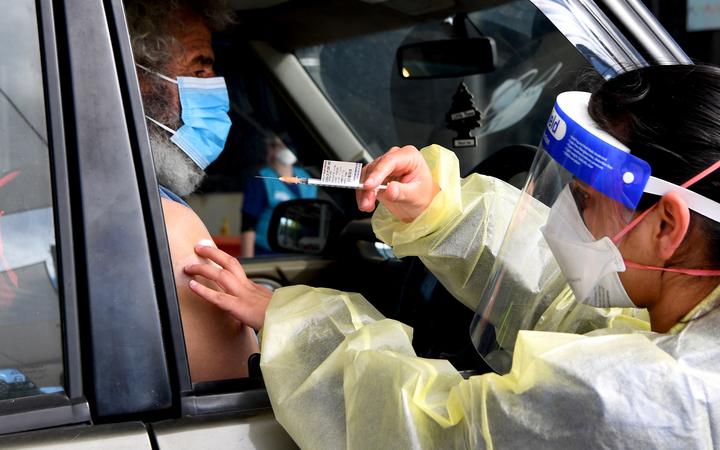 A resident receives a dose of the Pfizer Covid-19 vaccine in Australia's first drive through vaccination centre in the Melbourne suburb of Melton last month. Photo: AFP

On Wednesday, Premier Daniel Andrews said Victorians could no longer "hold out hope" of stamping out the Delta outbreak, and must instead limit the growth of cases while the community urgently vaccinates itself.

It was the first time the state's daily cases had been in triple digits since 110 cases were detected on 2 September last year at the tail of the Victoria's devastating second wave.

Victorian business owners said the state government announcement marked a "day of disappointment", warning of the long term economic consequences of the lockdown.

The Victorian head of the peak employer association Ai Group, Tim Piper, accused the government of dragging its heels on business support, saying the announced reopening of playgrounds was an insufficient reward for struggling business owners.

"Kids back into playgrounds is a positive change," he said.

"But it doesn't create any new economic activity, offer any security for jobs or job creation, help high school and VCE students or young adults."

General manager of the Chapel Street Precinct Association Chrissie Maus echoed Piper's sentiments, saying Victorian businesses had been given no hope by the government.

"It's only small privileges like playgrounds that are being dangled in front of us. Businesses are begging for some relief. We are not children, it's as though we're all in class detention," she said.

The government said it would have more to say about business support in the next few days.

One community case in Queensland

Queensland has recorded one locally acquired case - the case is a truck driver and is under investigation.

Premier Annastacia Palaszczuk said he lives on the Gold Coast but had travelled from Sydney and is currently back in NSW.

The man was infectious in the community for five days from 28 August to 1 September.

This is addition to the truck driver recorded yesterday.