Louisiana residents may be in the dark for days as officials take stock of the damage from Hurricane Ida, which has been downgraded to a tropical storm. 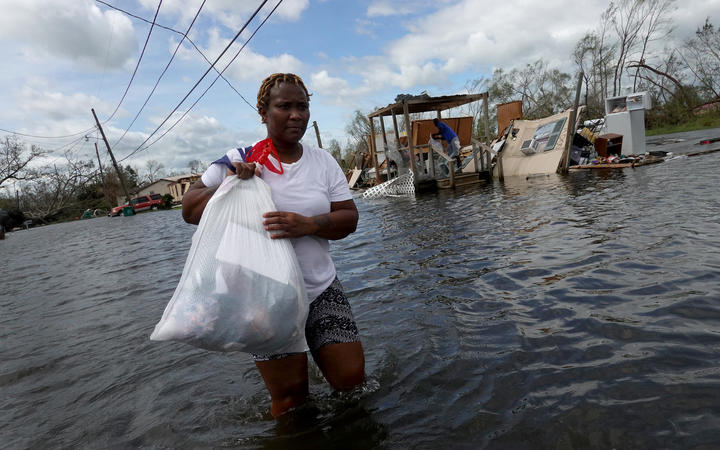 Dina Lewis rescues items from her home in Laplace, Louisiana, which was destroyed by Hurricane Ida on 30 August 2021 Photo: AFP / Getty Images

Ida made landfall on Sunday with 240km/h winds, the fifth strongest to ever hit the US mainland. About one million locals remain without power.

"It's going to be a difficult life for quite some time," said one local leader in the Greater New Orleans area.

About 5000 National Guard members have been deployed to aid search and rescue.

In addition, more than 25,000 workers from around the country have mobilised to support power restoration in the state, according to CNN.

At least one person is dead after a tree fell on their home in Ascension Parish, in Louisiana's Baton Rouge area.

State and local officials have conceded that number is likely to grow as search and rescue efforts continue, but argued the city had largely "held the line".

"The systems we depended on to save lives and protect our city did just that and we are grateful, but there is so much more work to be done," said New Orleans Mayor LaToya Cantrell on Monday.

She urged residents who had already evacuated their homes to stay put and not return until power and communications have been restored.

As the slow-moving Ida continues to move inland, it has weakened - but the National Hurricane Centre warned that heavy rain could still bring flooding to parts of Mississippi, Alabama and Florida.

Ida was previously deemed "life-threatening", drawing comparisons to Hurricane Katrina, a 2005 storm that had a path similar to Ida and killed 1800 people.

But it seemed that New Orleans' flood defences, strengthened in Katrina's aftermath, have done their job. Governor John Bel Edwards said the levee systems had "performed magnificently" and none have thus far been breached.

"But the damage is still catastrophic," he acknowledged on Monday. "We are still in a life saving mode."

President Joe Biden has declared a major disaster in the state, releasing extra funds for rescue and recovery efforts.

On Monday, he pledged that the federal government would "stand with the people of the Gulf [Coast] for as long as it takes for you to recover".

Entergy, the largest power company in Louisiana, warned that it would take days - and likely weeks in the hardest hit areas - to restore electricity to the more than one million homes without power across the state.

Ida gathered strength over the warm waters of the Gulf of Mexico during the weekend. More than 90 percent of oil production there has been shut down as a result of the storm.

On Sunday, Ida made landfall south of New Orleans as a category 4 hurricane - meaning it would cause severe damage to buildings, trees and power lines. As it moves inland, Ida's winds have dropped to 153km/h, meaning it is now a category 1 storm.

There are still fears of storm surges along the coast - which could be as high as 16ft (4.8m), potentially submerging parts of the low-lying coastline.

Covid-19 has also further complicated efforts to keep people safe. Louisiana hospitals are already under pressure from Covid-19, as the state has the third-highest rate of infections in the US.

Normally, hospitals in the predicted path of the hurricane would be evacuated, but this time there are few beds available, even at facilities further inland.

"We don't have any place to bring those patients. Not in state, not out of state," Mr Edwards said.

Ida came ashore on the 16th anniversary of Hurricane Katrina, a category 3 storm when it made landfall.

Since then, billions of dollars have been spent on flood defences, known as levees. So far, the levees have held, though a flash flood warning is in place for New Orleans.

High winds tore part of the roof off a hospital in the town of Cut Off, Louisiana, just inland from the Gulf of Mexico. The hospital said it had suffered "significant damage" but that its patients were safe.

The impact of climate change on the frequency of storms is still unclear, but increased sea surface temperatures warm the air above, making more energy available to drive hurricanes.

As a result, they are likely to be more intense with more extreme rainfall.