The Pentagon says it can't yet dispute claims that a US drone strike on a suspected suicide bomber in Afghanistan killed a number of civilians. 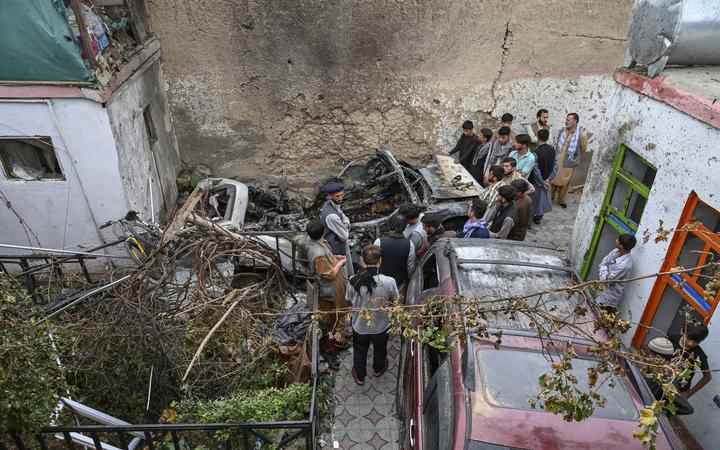 Afghan residents and family members of the victims gather next to a damaged vehicle a day after a US drone airstrike in Kabul on 30 August 2021. Photo: AFP

The strike, near Kabul airport, killed 10 members of one family, including six children, relatives have told the BBC.

The US military said it was targeting a vehicle carrying at least one person associated with the Afghan branch of the Islamic State group.

The US was assessing and investigating reports of civilian deaths, it added.

American commanders said there were "significant secondary explosions" after the drone strike - implying there were explosives at the scene - which may have harmed people nearby.

The youngest child to be killed was two-year-old Sumaya, and the oldest child was 12-year-old Farzad, the family told the BBC.

"It's wrong, it's a brutal attack, and it's happened based on wrong information," Ramin Yousufi, a relative of the victims, said.

He added, tearfully: "Why have they killed our family? Our children? They are so burned out we cannot identify their bodies, their faces."

Another relative, Emal Ahmadi, told the BBC that it was his two-year-old daughter who was killed in the strike.

Ahmadi said he and others in the family had applied for evacuation to the US, and had been waiting for a phone call telling them to go to the airport.

The US, Ahmadi added, had made "a mistake, it was a big mistake".

Pentagon press secretary John Kirby said the US was "not in a position to dispute" the reports.

"Make no mistake, no military on the face of the Earth works harder to avoid civilian casualties than the United States' military, and nobody wants to see innocent life taken," he said.

"We take it very, very seriously and when we know that we have caused innocent life to be lost in the conduct of our operations, we're transparent about it."

He then defended the intelligence about "what we believed to be a very real, a very specific and a very imminent threat" against Kabul's Hamad Karzai International airport from IS-K (Islamic State Khorasan Province), IS's Afghan affiliate.

In an earlier statement, US Central Command said there had been a number of "substantial and powerful subsequent explosions" following the drone strike.

It said the explosions suggested there had been "a large amount of explosive material inside, that may have caused additional casualties".

The US has been on high alert since a suicide bomber killed more than 100 civilians and 13 US troops outside the airport last Thursday. IS-K claimed responsibility.

Many of those killed had been hoping to board one of the evacuation flights leaving the city, which fell to the Taliban on 15 August.

The US had repeatedly warned of an increase in attacks as 31 August - the date set for the Americans' withdrawal from Afghanistan - drew closer.

On Monday, a US anti-missile system intercepted a rocket flying over the capital towards the airport, US officials said. IS-K claimed responsibility for a total of five rockets that were fired.

Video and pictures carried by local news outlets showed smoke wafting across the rooftops of Kabul, and what appeared to be a burning car on a street.

The White House said President Joe Biden was briefed on the rocket attack.

"The President was informed that operations continue uninterrupted at HKIA (Kabul airport), and has reconfirmed his order that commanders redouble their efforts to prioritize doing whatever is necessary to protect our forces on the ground," White House press secretary Jen Psaki said in a statement.

No US or Afghan casualties have been reported so far from Monday's incident.

The United States has installed an anti-rocket and mortar system to protect the airport from further attacks.

At the United Nations in New York, France and Britain are expected to propose a Security Council resolution calling for a safe zone in Kabul to protect people trying to leave the country.