Rolling Stones drummer Charlie Watts, who helped them become one of the greatest bands in rock 'n' roll, has died at the age of 80. 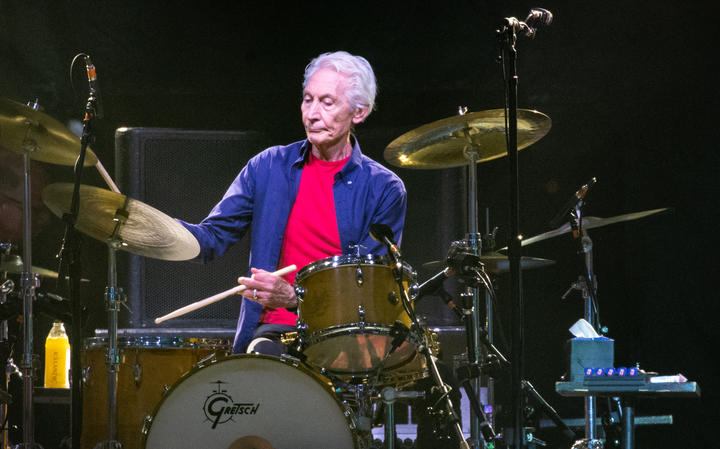 Charlie Watts performs on stage during their "No Filter" tour at NRG Stadium in Houston, Texas, July 2019. Photo: AFP

"It is with immense sadness that we announce the death of our beloved Charlie Watts," a statement said.

It said he was "a cherished husband, father and grandfather" and "one of the greatest drummers of his generation".

Tributes have come from stars including The Beatles' Sir Paul McCartney and Sir Ringo Starr, and Sir Elton John.

Sir Paul described Watts as "a lovely guy" and "a fantastic drummer" who was "steady as a rock".

Sir Elton wrote on Twitter: "A very sad day. Charlie Watts was the ultimate drummer. The most stylish of men, and such brilliant company."

The Beach Boys' Brian Wilson said he was "shocked" to hear the news about Watts, who he described as "a great drummer".

The news came weeks after it was announced that Watts would miss the band's US tour dates to recover from an unspecified medical procedure. Watts was previously treated for throat cancer in 2004.

He had been a member of the Stones since January 1963, when he joined Mick Jagger, Keith Richards and Brian Jones in their fledgling group.

Watts helped them become, with The Beatles, one of the bands who took rock 'n' roll to the masses in the 60s with classics like (I Can't Get No) Satisfaction, Jumpin' Jack Flash, Get Off My Cloud and Sympathy for the Devil.

Other tributes came from The Sex Pistols' Glen Matlock, who said he "kept the beat to the soundtrack of our lives", while Nile Rodgers wrote: "Thanks for all the great music."

Singer-songwriter Joan Armatrading wrote: "Why am I crying? Because Charlie Watts has died. Who knew that any of the Rolling Stones musicians would ever leave this earth."

Fellow singer Curtis Stigers said: "My mom always claimed I was conceived during the chorus of Satisfaction by The Rolling Stones. Thank you, Charlie Watts. I owe you my life."

The statement from the Rolling Stones' publicist said: "He passed away peacefully in a London hospital earlier today [Tuesday] surrounded by his family.

"We kindly request that the privacy of his family, band members and close friends is respected at this difficult time."

In 2016, Watts was ranked 12th in Rolling Stone magazine's list of the 100 greatest drummers of all time.

He is survived by his wife Shirley, daughter Seraphina and granddaughter Charlotte.

The subtle, stoic heartbeat of the Stones

Charlie Watts was never the most flashy drummer. He wasn't known for the frenzied solos of Cream's Ginger Baker, or for placing explosives in his kick drum like The Who's Keith Moon. Instead, he was the subtle, stoic heartbeat of The Rolling Stones for almost 60 years.

A jazz aficionado, he fell in love with the drums after listening to Chico Hamilton play brushes on Walking Shoes; and was only introduced to the dark arts of rock 'n' roll by Mick Jagger and Keith Richards in the early 1960s.

He joined the Stones in 1963 after the band had discarded several other drummers - and they never looked back. "Charlie Watts gives me the freedom to fly on stage," Richards later observed.

His jazz-inflected swing gave the Stones' songs their swagger, pushing and pulling at the groove, creating room for Jagger's lascivious drawl.

He was at his best on the cowbell-driven Honky Tonk Women or the locked-down groove Gimme Shelter (where he even threw in some uncharacteristically showy fills).

On and off the stage, he was quiet and reserved - sticking to the shadows and letting the rest of the band suck up the limelight.

"I've actually never been interested in all that stuff and still am not," he told the San Diego Tribune in 1991. "I don't know what showbiz is and I've never watched MTV. There are people who just play instruments, and I'm pleased to know that I'm one of them."