Lebanon's leading Christian cleric said there could be no immunity from prosecution over the catastrophic Beirut port blast and that officials were evading investigation, as many Lebanese marked the first anniversary by demanding justice. 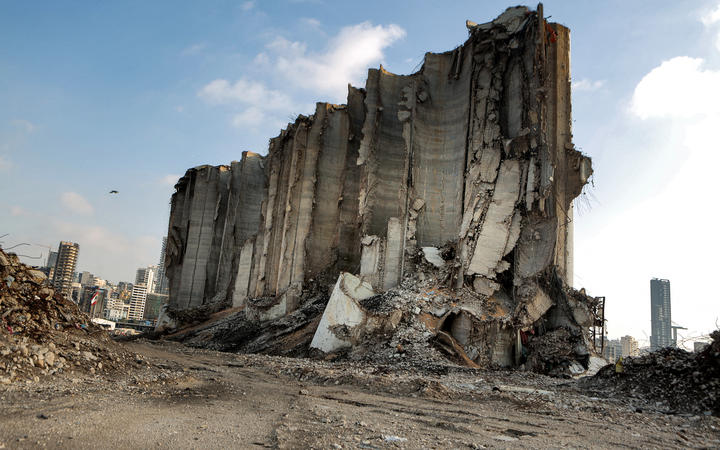 A partial view of the damaged grain silos at the port of Lebanon's capital Beirut, almost a year after the August 4 massive explosion that killed more than 200 people and injured scores of others. Photo: AFP

One year since the blast, caused by a huge quantity of ammonium nitrate kept at the port for years, no senior official has been held to account, infuriating many Lebanese.

One of the biggest non-nuclear explosions ever recorded, the blast killed more than 200 people, wounded thousands and was felt in Cyprus, more than 240 km (150 miles) away.

Thousands of people, many holding pictures of the dead and waving Lebanese flags, gathered near the port.

As a memorial service got under way at the port, water cannon and tear gas were fired at protesters who threw stones towards security forces near parliament. Eight people were wounded, the Red Cross said.

People place a white rose on portraits of blast victims. More scenes of trauma and grief on the one-year anniversary of the Beirut explosion: https://t.co/E090P9C61k Mohamed Azakir pic.twitter.com/vN9Zbm4vtr

An investigation is stalling, with requests denied for immunity to be lifted from senior politicians and former officials. All those sought for questioning by the Lebanese investigators have denied any wrongdoing.

The chemicals arrived on a Russian-leased cargo ship that made an unscheduled stop in Beirut in 2013. An FBI report seen by Reuters last week estimated around 552 tonnes of ammonium nitrate exploded, far less than the 2,754 tonnes that arrived.

"It is shameful that officials evade the investigation under the cover of immunity," al-Rai, Lebanon's most senior Christian cleric, said during a mass at the port.

"All immunities fall in the face of the victims' blood, there is no immunity against justice."

"We want to know who brought in the explosives ..., who allowed for their unloading and storage, who removed quantities of it and where it was sent."

The damage is still visible in much of the capital, particularly the predominantly Christian districts of east Beirut that were most badly affected. The port resembles a bomb site, its huge grain silo still unrepaired.

A huge banner on a building overlooking the port said: "Hostages of a Murderous State."

Relatives of the dead clutched photos of their loved ones.

Army helicopters flew overhead giving off red and green smoke - the national colours - as koranic verses were recited at the start of the service and the victims' names were read.

"We will not forget and we will not forgive them ever. And if they can't bring them to account, we will by our own hands," said Hiyam al-Bikai, dressed in black and clutching a picture of her son, Ahmad, who was killed when masonry fell on his car. 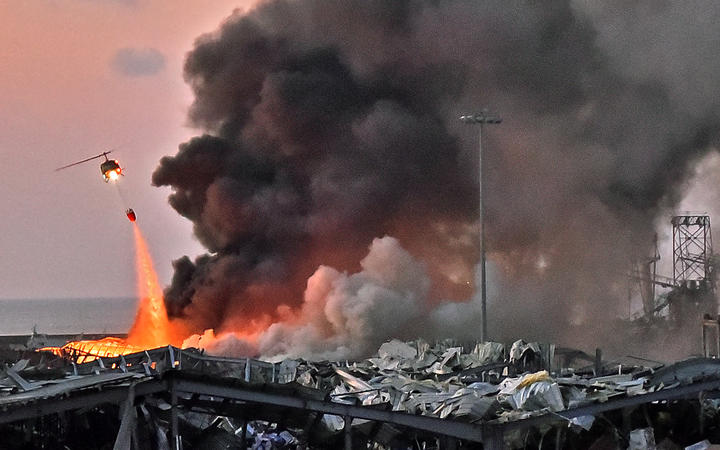 In this file photo taken on August 04, 2020 a helicopter puts out a fire at the scene of an explosion at the port of Lebanon's capital Beirut. Photo: AFP

Reuters reported last August that Prime Minister Hassan Diab and President Michel Aoun were both warned in July last year that the chemicals posed a security risk and could destroy the capital if they exploded.

Aoun has said he is ready to testify if needed, and that he supports an impartial investigation. read more

Diab, who quit after the blast, has said his conscience is clear.

Leading prayers at a hospital that was badly damaged in the blast, Greek Orthodox Archbishop Elias Audi said nobody was above the law, and "whoever obstructs justice is a criminal, even if they are highly placed".

At the time of the explosion, Lebanese were already facing deepening hardship due to the financial crisis caused by decades of state corruption and waste.

The meltdown worsened throughout the last year with the governing elite failing to establish a new cabinet to start tackling the crisis even as poverty has soared and medicines and fuel have run out.

A donors' conference hosted by France raised $370 million. read more France has led Western pressure on Lebanese leaders to enact reforms, but to no avail. "Lebanese leaders seem to bet on a stalling strategy, which I regret and I think is a historic and moral failure," Macron said.

Pope Francis wished Macron success and said donors should help Lebanon "on a path of resurrection". He said he had a great desire to visit Lebanon, where many had lost "even the illusion of living".

The state has taken no steps towards reforms that might ease the economic crisis, with the sectarian elite locked in a power struggle over cabinet posts.

As the crowds built in Beirut, two people were injured in scuffles between supporters of rival parties in the nearby Gemmayzeh area, a security source said. Gun shots were fired into the air.