New South Wales has recorded 170 new locally-acquired cases and at least 42 of those were infectious while in the community. 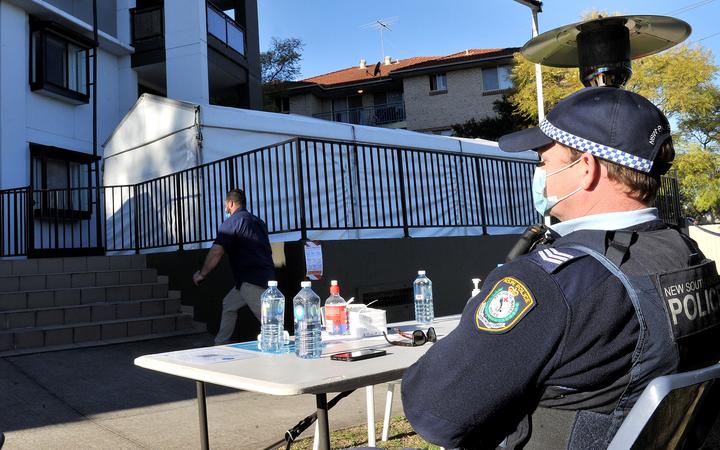 A police officer stays guard outside an isolated residential building in Sydney's western suburb of Blacktown after several cases were reported among the residents. Photo: AFP

Premier Gladys Berejiklian stressed again the need for people not to leave their homes and not to mix households.

As well as the 42 people active in the community while infectious, a further 10 were active for part of their infectious period.

Of the new cases, 77 were linked to a known case or cluster but 93 remained under investigation.

Berejiklian issued a warning to anyone thinking of attending another anti-lockdown protest in Sydney tomorrow following last week's illegal demonstration.

"Your actions will hurt, forget about the rest of us, but you could be taking the disease home and passing it on to your parents, your siblings, your brothers and sisters or anybody you might have limited contact with," she said.

"Do not give those you love the most a death sentence."

Police Commissioner Mick Fuller said anyone who comes to protest in Sydney tomorrow can expect to be met by 1000 police officers.

"This is such an important time for New South Wales in terms of winning the battle against the virus and coming into town to protest is not the answer," he said.

More than 95,000 tests were conducted in the Australian state yesterday.

There are currently 187 Covid-19 cases admitted to hospital, with 58 people in intensive care, 24 of whom require ventilation.

Meanwhile, Queensland is on alert after a 17-year-old school student contracted the virus, baffling officials.

"This is quite concerning because I'm struggling to understand how she has acquired it," state Chief Health Officer Jeanette Young told reporters.