Iran will next week become the first country outside of Cuba to start producing one of the Communist-run island's homegrown Covid-19 vaccines on an industrial scale, Cuban state-run media said on Wednesday. 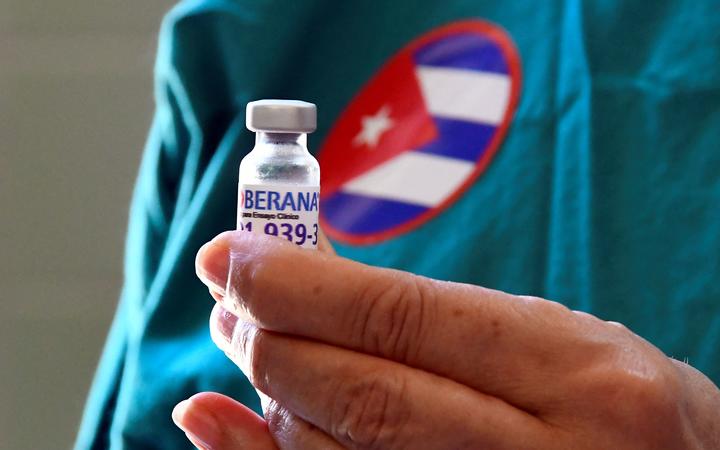 Iran and Cuba will produce millions of doses of Soberana 2 in the Middle Eastern country under the name PastuCovac. Photo: AFP

The allies are under fierce US sanctions that they say have long encumbered access to medicines and medical inputs, motivating them to be self reliant.

Both have produced a raft of experimental Covid-19 vaccines, some with patriotic names like Cuba's Soberana 2 - or Sovereign 2.

Preliminary Cuban data from late-phase clinical trials suggests Soberana 2 and its other most advanced Covid-19 vaccine Abdala are among the world's most efficient, with more than 90 percent efficacy, although critics say they will remain sceptical until it publishes the figures in international, peer-reviewed journals.

Iran's Pasteur Institute agreed earlier this year to collaborate with Cuba's Finlay Institute, which developed Soberana 2, to implement phase three clinical trials of the shot in the Islamic Republic, leading to its approval for emergency use early in July.

Iran and Cuba would produce millions of doses of Soberana 2 in the Middle Eastern country under the name PastuCovac, Finlay Institute chief Vicente Verez Bencomo said during a visit to Tehran this week, according to Cuban state-run media on Wednesday.

"Usually you need 15 years to develop a vaccine from zero to the industrialisation phase but we did all the steps in a year," he was quoted as saying, "and the evidence is that it works very well."

Cuba's biotech sector has a long history of vaccine development, producing 80 percent of vaccines used in the Caribbean island nation and exporting some of them.

Mexico, Vietnam, Argentina and Jamaica are among the countries that have expressed an interest in producing or buying its Covid-19 vaccines.

That could provide an economic and diplomatic boon to the cash-strapped country, which has faced recent criticism over its crackdown on unprecedented protests as well as support for its demand that Washington lift its trade embargo.

Cuba and Iran, listed among the world's 20 highest Covid-19 caseloads per capita, charge US sanctions with hampering their pandemic response, including vaccine development.

The sanctions theoretically exempt medical products but often in practice put foreign pharmaceutical companies off trading with them and banks from processing transactions with them.

Washington last month issued guidance easing the way for delivery of products to combat the pandemic to some heavily sanctioned countries including Iran, though not to Cuba.