Firefighters say their search for bodies in the rubble of the collapsed Florida apartment block has finally ended, but one victim remains unaccounted for. 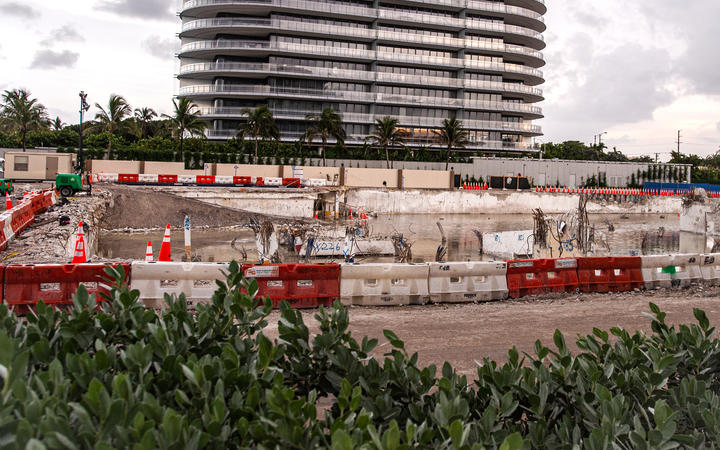 General view of the land where the partially collapsed Champlain Towers South building was located in Surfside Florida, on July 23, 2021 Photo: AFP

At least 97 people were killed when the 12-storey Champlain Towers South fell in the early hours of 24 June.

But the remains of 54-year-old Estelle Hedaya are yet to be identified.

Her family say the official end of the search has left them feeling helpless and worried she will be forgotten.

Nobody has been pulled alive from the rubble since the first hours after the disaster, and officials formally switched from a search-and-rescue mission to a recovery effort on 7 July.

Battling tropical storms and the risk of unstable debris, rescuers worked through more than 13,000 tonnes of broken concrete.

The Surfside site has mostly been cleared, with the rubble moved to a state warehouse for further inspection.

After the search ended, officials thanked firefighters who worked 12-hour shifts while camping out at the site.

"It's obviously devastating. It's obviously a difficult situation across the board," Fire Chief Alan Cominsky said at a ceremony on Friday (local time).

"I couldn't be prouder of the men and women that represent Miami-Dade Fire Rescue."

The mission had to be halted several times, due to instability in the mound of rubble as well as Tropical Storm Elsa. Officials had to order the part of the building that remained standing be demolished on 4 July.

Officials say there are no more bodies to be found at the site, but the conclusion has come as devastating news to friends and relatives of Estelle Hedaya, believed to be the disaster's 98th victim.

Her younger brother Ikey has given DNA samples and visited the site twice to see the search efforts for himself.

"As we enter month two alone, without any other families, we feel helpless," he told the Associated Press news agency.

Another friend Leah Sutton, who had known Hedaya since birth, told the agency: "They seem to be packing up and congratulating everyone on a job well done. And yes, they deserve all the accolades, but after they find Estelle."

Other victims of the disaster include the seven-year-old daughter of a Miami firefighter, a 92-year-old grandmother and the sister of Paraguay's first lady.

The site - which is being treated as a crime scene - is now under the control of police.

What caused the 40-year-old building to fall to the ground while its residents slept remains unknown.

But a 2018 report that found structural problems has prompted several inquiries, including a grand jury investigation.

The building association's board said it would appoint an "independent receiver... to oversee the legal and claims process".

The tragedy has led authorities to check housing blocks across southern Florida for similar issues.