Victoria has recorded 14 new local Covid-19 cases, all linked to the current outbreak. 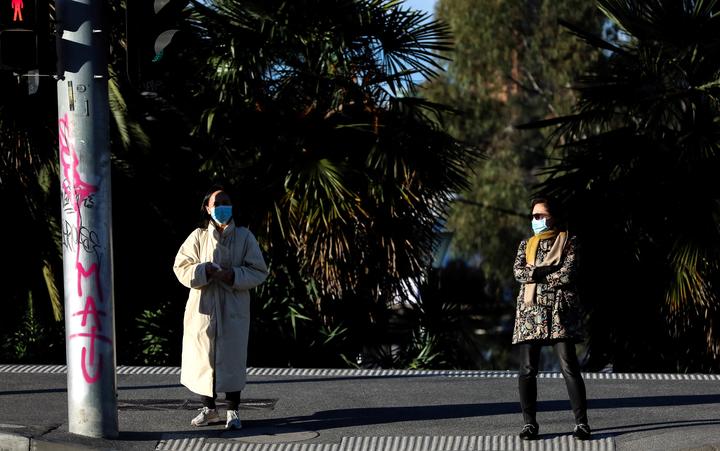 Pedestrians maintaining distance at a traffic light in the Southbank area of Melbourne, 16 July 2021. Photo: AFP

Ten of the 14 cases were in quarantine throughout their entire infectious period, with one of the other four cases still to be interviewed.

Yesterday, the state reported the highest daily figure this year at 26 local cases, but almost all were isolating during their infectious period and authorities said there were clear signs the lockdown was working.

The lockdown is currently scheduled to end at 11:59pm on Tuesday, after being extended by a week.

Meanwhile, more venues have been added to Victoria's list of exposure sites, which now stands at more than 390.

There were 14,302 vaccine doses administered in state-run centres.

Shoppers in New South Wales are being warned to limit their outings as more supermarkets are being visited by confirmed Covid-19 cases.

Premier Gladys Berejiklian said while the two main places where the virus continued to spread were "workplaces and also in households", retail stores were emerging as a growing source of transmission.

"We're also noticing now workers and patrons are picking up the disease and taking it home to their families."

NSW Health last night was forced to quash social media reports that supermarkets were going to close for four days next week.

The list of supermarkets associated with confirmed Covid cases is continuing to grow, with Woolworths at Belrose in Sydney's north-east flagged by health officials.

Supermarkets like Coles and Woolworths had seen an influx in online orders since the NSW government put the state into lockdown more than three weeks ago. Some consumers have reported delays, but the supermarket chains insist they're working hard to meet an influx in demand.

NSW Health last night was forced to quash social media reports that supermarkets were going to close for four days next week.

"The decision has been made on the basis of short term efficacy and safety data," the TGA said in a statement.

"Continued approval depends on the evidence of longer term efficacy and safety from ongoing clinical trials."

People 16 years and older have already been provisionally approved by the regulator, but the TGA had been asked to look at whether the vaccine was safe for younger people.

Although the vaccine has been approved for this younger age group, they will not be immediately included.

Determining how to include children in the vaccine rollout, including whether to prioritise those with underlying health conditions who are at more risk of serious illness, will be left to the government's immunisation advisory panel.

It is expected to make that decision late next week.