Victoria's lockdown is being extended beyond Tuesday as the state records 13 new community cases of Covid-19, and the outbreak in New South Wales continues to grow with 98 new cases today. 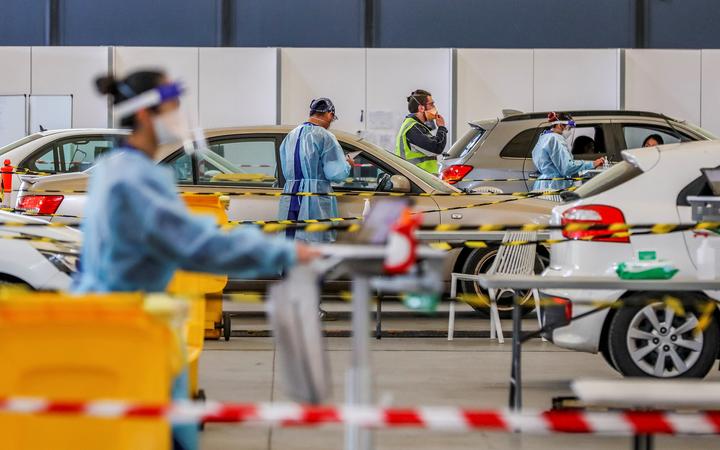 Residents in their cars queue at a drive-through Covid-19 testing facility at the Melbourne Showgrounds on 16 July, 2021. Photo: AFP / Asanka Brendon Ratnayake

All new cases in Victoria are linked to the current outbreak and includes one in the regional town of Mildura that was announced yesterday.

Premier Daniel Andrews has not put a timeframe on when the lockdown will lift.

"We will not be ready to lift this lockdown at midnight tomorrow night," Andrews said.

"Exactly how much more time, that advice is not with me yet, those decisions have not been made yet.

"I know that this is not the news that people want to hear but you've got to do the right thing, this thing is moving so fast, it's so challenging, it's so dynamic."

Meetings will be held to determine the rules and timelines for lifting the lockdown.

Andrews said 15,800 primary close contacts had been identified and are in isolation.

More than 3000 of those are people who were at the Melbourne Cricket Ground on the day a positive case attended, and a further 1800 attended a rugby match at AAMI Park where an infected person

"We are running alongside this virus, but we are not yet in front of it," he said.

Chief Health Officer Brett Sutton said a new case had emerged out of the gathering of people who watched the EURO football final between Italy and England at the Crafty Squire pub on 12 May.

"It is absolutely an example of how quickly this variant is moving and the short time we're seeing between exposure and then being infectious," he said.

"Previously, last year we would not have seen any circumstances where someone who had been exposed was transmitting to someone else a day and a half later."

Quarantine-free travel between New Zealand and Victoria was paused on 15 July, and will be reviewed today.

The travel bubble from New South Wales remains paused and managed flights are still in place but those returning will have to go into managed isolation for 14 days after arriving in New Zealand.

Meanwhile, NSW Premier Gladys Berejiklian says the government is "throwing everything" it has at stemming its Covid-19 outbreak after the state recorded 98 new cases.

Greater Sydney has woken up to its second day of enhanced stay-at-home measures introduced at the weekend.

Countless businesses not considered an essential service have boarded up and about 750,000 people in Sydney's south-west suburbs are locked in their local government area (LGA).

Berejiklian said 20 of the cases announced today were out in the community whilst infectious.

"That 20 number is the number we are really keen to nudge," she said.

"We need to get ahead of that number in order to reduce the cases in the community and the closer we get that number to zero, the sooner we can end the lockdown."

She lamented the lockdown orders, calling them a "deep blow on all of us".

"We know the Delta variant is nothing like we have seen," she said.

"We know how challenging it is but we wouldn't have thrown everything at it if we didn't have a chance of quashing it."

"It is pleasing to see that the venues have been narrowed and that people appear to be taking the help advice about limiting the time spent anywhere and also not going out when you are sick," Dr Chant said.

She said over two-thirds of cases are being detected in south-west Sydney, where the state government yesterday implemented enhanced lockdown orders.

Dr Chant said the Fairfield area had 47 cases, while Canterbury-Bankstown and Liverpool had 13 each.

The source of infection for 37 cases are under investigation.

The highly infectious variant of the Delta strain has forced the state government to reconsider its position on vaccinating children, Dr Chant said.