Billionaire Sir Richard Branson has successfully reached the edge of space on board his Virgin Galactic rocket plane. 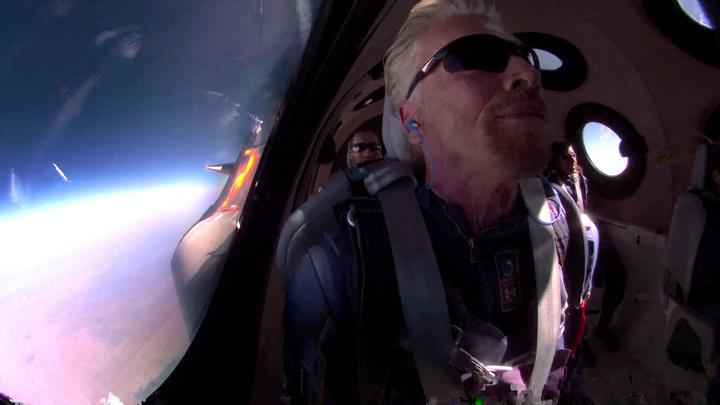 The UK entrepreneur flew high above New Mexico in the US in the vehicle that his company has been developing for 17 years.

The trip was the "experience of a lifetime", he said. He returned safely to Earth just over an hour after leaving the ground.

"I have dreamt of this moment since I was a kid, but honestly nothing can prepare you for the view of Earth from space," he said in a press conference following the flight. "The whole thing was just magical."

The trip also makes him the first of the new space tourism pioneers to try out their own vehicles, beating Amazon's Jeff Bezos and SpaceX's Elon Musk.

The height reached by Sir Richard in the rocket plane, known as Unity, was 85km.

The businessman was accompanied on the mission by the vehicle's two pilots, Dave Mackay and Michael Masucci, and three Galactic employees - Beth Moses, Colin Bennett and Sirisha Bandla.

The latter trio and Sir Richard were presented with commercial astronaut wings after the flight by former space station commander and Canadian astronaut, Chris Hadfield.

Sir Richard billed the flight as a test of the space tourism experience he expects to begin selling to customers from next year.

Some 600 individuals have already paid deposits for tickets that will cost them up to $US250,000.

These are all people who want to reach a height where they can see the sky turn black and marvel at the Earth's horizon as it curves away into the distance. Such a flight should also afford them about five minutes of weightlessness during which they will be allowed to float around inside Unity's cabin.

It's been a long road for Sir Richard to get to this point. He first announced his intention to make a space plane in 2004, with the belief he could start a commercial service by 2007.

But technical difficulties, including a fatal crash during a development flight in 2014, have made the space project one of the most challenging ventures of his career.

Space tourism is a sector being rekindled after a decade's hiatus, and it's about to get very competitive.

Throughout the 2000s, seven wealthy individuals paid to visit the International Space Station (ISS). But this adventurism, organised under the patronage of the Russian space agency, ceased in 2009.

The Russians, too, are reprising their commercial flights to the ISS, and there are even those who want to launch private space stations for people to visit. Among these is Axiom, a company started by a former Nasa ISS programme manager.

Elon Musk travelled to New Mexico to support his friend, and following the flight Mr Bezos sent his congratulations.

There's clearly something of an edge in the Branson-Bezos relationship, however.

On Friday, the retail billionaire's Blue Origin space company had issued a tweet that took a pop at Virgin Galactic's Unity vehicle. The posting repeated a claim that anyone who flew on the rocket plane would forever have an asterisk by their name because they wouldn't reach the "internationally recognised" altitude for where space begins - the so-called Kármán line of 100km.

The US government has always recognised the boundary of space to be at about 80km and it awards astronaut wings to anyone who exceeds this altitude. Before Sunday, only 580 people had ever been above this height.

Unity is a sub-orbital vehicle. This means it can't achieve the velocity and altitude necessary to keep it up in space to circle the globe.

The vehicle is designed to give its passengers stunning views at the top of its climb and allow them a few minutes to experience weightlessness.

Unity is first carried by a much bigger aeroplane to an altitude of about 15km where it is released.

A rocket motor in the back of Unity then ignites to blast the ship skyward.

The maximum height achievable by Unity is roughly 90km. Passengers are allowed to unbuckle to float to a window.

Unity folds its tailbooms on descent to stabilise its fall before then gliding home.