Rescuers are desperately searching for any survivors trapped in the rubble of a collapsed 12-storey residential building north of Miami. 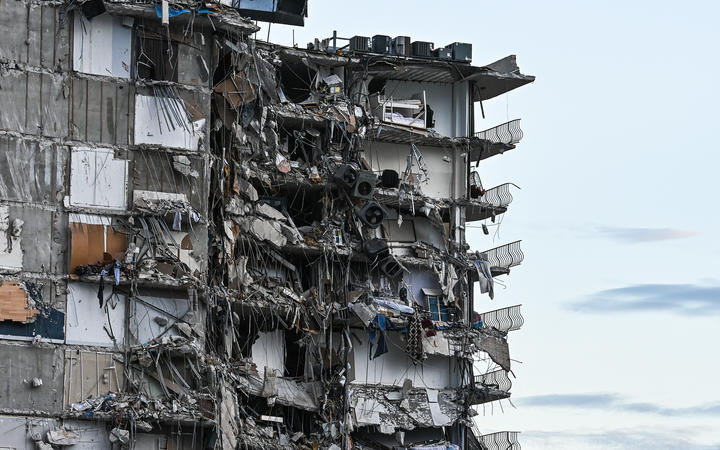 At least one person has been killed and 99 are still missing, officials say.

As families desperately wait for news, search teams have been working around the clock and have reported hearing people banging beneath the debris.

What caused the 40-year-old building to collapse early on Thursday morning remains unclear.

At least 102 people have now been accounted for, but it is uncertain how many were in the building when it came down. Dozens of survivors have been pulled out of the rubble.

As night fell, hundreds of rescuers were using sonar cameras and specially trained dogs as they scoured the rubble for survivors. Teams were tunnelling from an underground car park below the building in an effort to reach victims.

"Fire and rescue are in there with their search team, with their dogs," Miami-Dade Police Director Freddy Ramirez told reporters.

"They're in search-and-rescue mode, and they will be in that mode for a while. They are not quitting. They're going to work through the night. They are not stopping."

Search teams detected sounds of banging and other noises, but no voices coming from the tonnes of debris.

But officials say the efforts are dangerous as further rubble could collapse on top of them.

"Any time we started breaching parts of the structure, we get rubble falling on us." 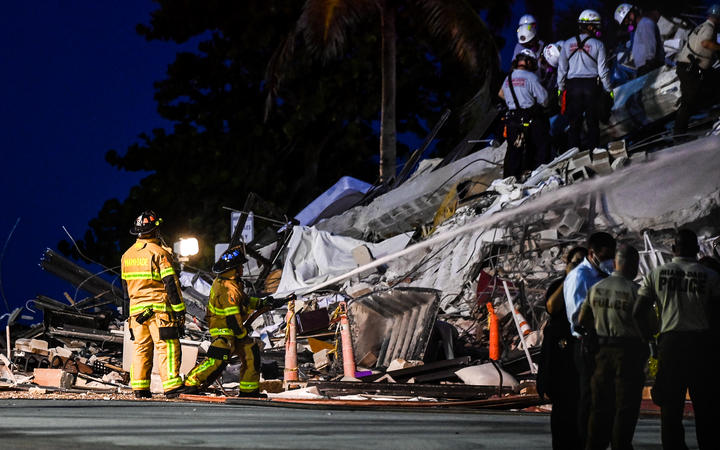 Search and Rescue personnel worked throughout the night searching for survivors Photo: AFP

Constant rain and storms are further complicating an already difficult task for the search-and-rescue teams.

Authorities have begun taking DNA samples from relatives of those still missing in case only remains of their family members are found in the rubble.

Relatives of the missing have been huddled around a community centre a few blocks from the collapsed building, waiting for information and fearing the worst. They have been putting out appeals on social media for information that could help them find their loved ones.

Nicolas Fernandez said his calls to missing loved ones had gone unanswered.

"I think they're gone," he told CBS. "I don't want to be pessimistic, but we've been calling them non-stop with no reply."

Jenny Urgelles woke up to the news that her parents' building had collapsed. She called them, but both their phones went straight to voicemail.

"I am holding on to hope. I'm very desperate to know what's happening," she told a local TV channel.

A large section of the oceanfront Champlain Towers in the town of Surfside crumbled to the ground in the early hours of Thursday.

Eyewitnesses described hearing what sounded like thunder before seeing a huge cloud of dust in the aftermath of the collapse. One compared the scene to the 11 September 2001 attacks on the Twin Towers in New York. 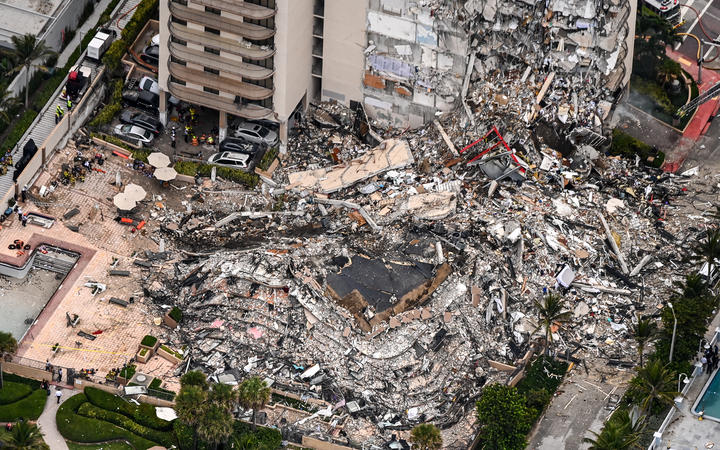 This aerial view, shows search and rescue personnel working on site after the partial collapse of the Champlain Towers South in Surfside, north of Miami Beach Photo: AFP

Resident Barry Cohen was in bed when the building started to collapse. "It sounded like thunder, and my wife and I, we went out on the balcony; it looked like a bomb had exploded, dirt and dust and smoke all over the place," he told the BBC.

They were told by a police officer to wait in their apartment. Then "the whole building just shook with a huge, huge explosion," Cohen said.

"When we opened the door, there was no building there, it was just a pile of rubble," he said. "So we went down into the garage, and there was water leaking from the pipes; it was up to about my knee, and we said: 'We don't want to stay down here because we could end up drowning.'"

Eventually, he spoke to the emergency services and they rescued him before the building collapsed completely.

What caused the collapse?

We don't yet know. A full investigation will begin after the rescue mission, officials said.

As the building has stood since 1980, it was due its standard 40-year review. The building was undergoing its "recertification" process and required repairs, officials said.

Work was being done on the building's roof, but Surfside Mayor Charles Burkett said he did not see how that could have been the cause.

Experts who studied the building last year said it was unstable and had been sinking since the 1990s.

One study from a researcher at Florida International University found that the building, constructed on reclaimed wetlands, had been sinking at a rate of two millimetres per year for the last three decades, which may have affected the building structurally.