Former Bosnian Serb commander Ratko Mladic has lost his appeal against a 2017 conviction for genocide, war crimes and crimes against humanity. 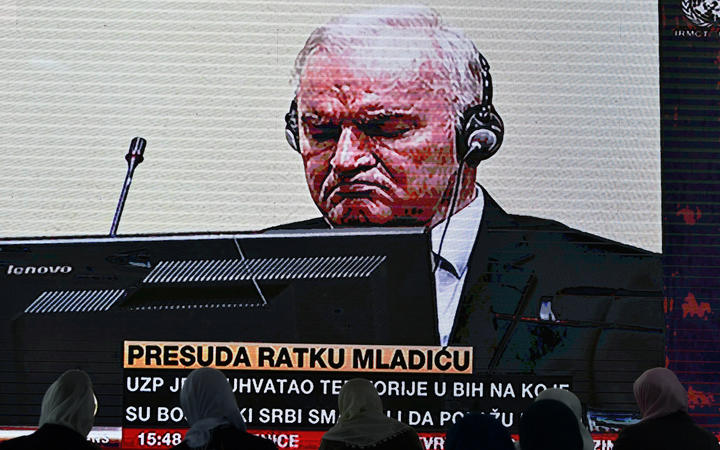 Former Bosnian Serb military chief Ratko Mladic (C) appears on the screen of a live television broadcast from The Hague in the Netherlands. Photo: AFP

The UN court upheld the life sentence for his role in the killing of around 8000 Bosnian Muslim (Bosniak) men and boys in Srebrenica in 1995.

The massacre, in an enclave supposed to be under UN protection, was the worst atrocity in Europe since World War Two.

It is not yet clear where Mladic will serve the rest of his sentence.

The five-person appeals panel found Mladic had failed to provide evidence to invalidate the previous convictions against him, although the presiding judge dissented on almost all counts.

However, the Appeals Chamber also dismissed the appeal brought by the prosecution, which had sought a second conviction against Mladic over crimes committed against Bosnian Muslims and Bosnian Croats in some other areas during the war.

The verdict was delayed by technical difficulties, which continued throughout the session. 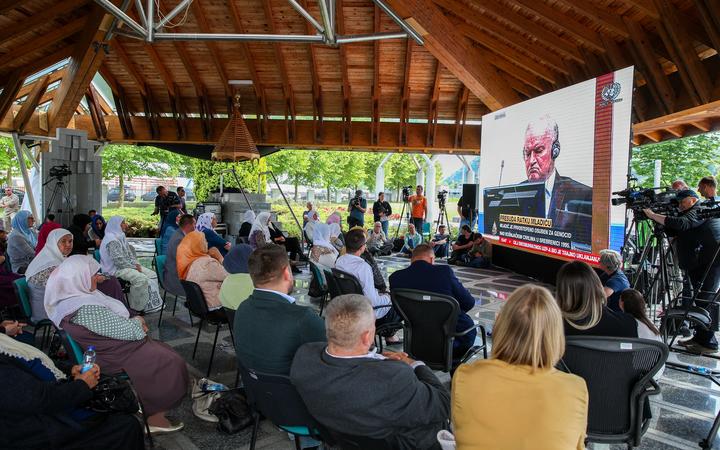 Mladic had denounced the tribunal during his appeal hearing in August, calling it a child of Western powers. His lawyers had argued he was far away from Srebrenica when the massacre happened.

Mladic, known as the "Butcher of Bosnia", was one of the last suspects to face trial at the UN's International Criminal Tribunal for the former Yugoslavia. He was arrested in 2011 after 16 years on the run.

In 2017 he was found guilty of genocide over Srebrenica, but acquitted of genocide over his army's 1992 campaign, in which Bosniaks and Bosnian Croats were expelled from their homes or detained in appalling conditions.

In 2016, the same court convicted former Bosnian Serb leader Radovan Karadzic of planning the Srebrenica massacre, among other crimes.

His initial 40-year sentence for genocide and war crimes was later increased to life in prison in 2019 - the remainder of which he will serve in the UK.

Survivor Semso Osmanovic, who lost 23 family members in the massacre, told the BBC's Guy De Launey that the verdict meant he finally felt able to return to his home town.

"I was living the whole of my life for this moment - to see justice being done by the international court. And hoping to bring my children and my wife to Srebrenica," he said. "That's the place I was born."

Sehida Abdurahmanovic, whose husband was killed in Srebrenica, watched the verdict at a memorial centre in Potocari.

"Mothers who barely hear, who can not see, those sick and can hardly walk, came to see this. As it was yesterday, everything is still fresh," she told BBC News Serbian.

"It is of utmost importance that he got this life sentence and that genocide in Srebrenica was confirmed."

In Sarajevo, one Bosnian newspaper led its online coverage of the verdict with the headline: "Look at the butcher's tears when he realises that he will die behind bars".

But the reaction among Mladic's supporters was very different.

The former general's son, Darko Mladic, said his father "did not have a chance for a fair trial" and described the proceedings as "a travelling circus".

The current president of the Bosnian Serb enclave, Zeljka Cvijanovic, said the tribunal had "once again confirmed its role as anti-Serb court, which establishes responsibility for war crimes not by evidence, but by the ethnicity of the indicted".

What happened during the appeal?

The hearing in August had been delayed by Mladic's health problems and coronavirus restrictions.

He remained defiant throughout, attacking both the court and the prosecutor.

Speaking about Srebrenica, he said he had signed an agreement with the Bosnian Muslim army to honour it and other protected areas, and suggested he was not to blame for any violation of these zones.

But prosecution lawyer Laurel Baig said Mladic had been convicted of some of "the most heinous crimes of the 20th Century".

"Mladic was in charge of the Srebrenica operation," she said. "He used the forces under his command to execute thousands of men and boys."

A defence lawyer, Dragan Ivetic, denied his client had played a role, saying: "Mr Mladic is not a villain. He was someone who at all times was trying to help the UN do the job it couldn't do in Srebrenica at a humanitarian level."

How did the genocide happen?

Between 1991 and 1999 the socialist state of Yugoslavia broke up violently into separate entities covering the territories of what were then Serbia and Montenegro, Bosnia and Herzegovina, Croatia, Macedonia and Slovenia.

Of all the conflicts, the war in Bosnia was the bloodiest as, ethnically and religiously, it was the most divided.

Yugoslav army units, withdrawn from Croatia and renamed the Bosnian Serb Army, carved out a huge swathe of Serb-dominated territory in Bosnia.

More than a million Bosniaks and Croats were driven from their homes in so-called ethnic cleansing, and Serbs suffered too. By the time the war ended in 1995, at least 100,000 people had been killed.

At the end of the war in 1995, Mladic went into hiding and lived in obscurity in Serbia, protected by family and elements of the security forces.

He was finally tracked down and arrested at a cousin's house in rural northern Serbia in 2011.