The Victorian government has put the state in lockdown for a week to contain the Covid-19 outbreak in Melbourne. 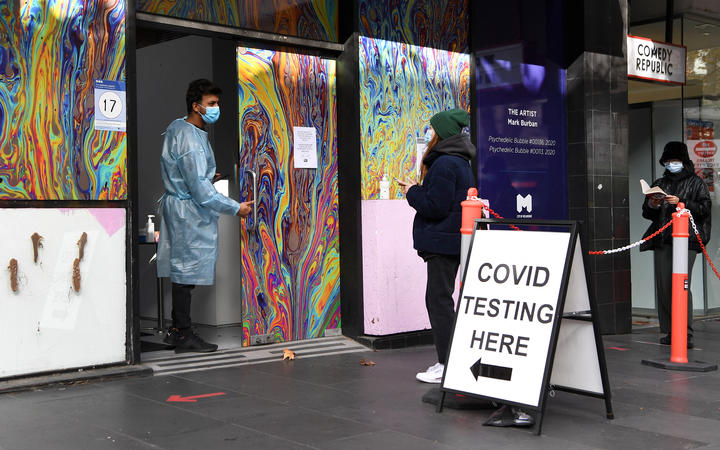 Victorians would not be allowed to have any visitors to the home, other than an intimate partner. There will be no public gatherings, while restaurants, pubs, and cafes can provide takeaway.

Under the lockdown, masks must be worn everywhere, both indoors and outdoors, unless an exemption applied.

There are currently 34 active cases currently and there were 40,411 tests yesterday - the highest ever processed in Victoria.

"In the last day, we have seen 12 linked new cases, bringing the total number of cases linked to the hotel quarantine breach in South Australia to 26," Merlino said.

"In the last day, we've seen more evidence we're dealing with a highly infectious strain of the virus, a variant of concern, which is running faster than we have ever recorded.

"From first thing this morning, we have identified in excess of 10,000 primary and secondary contacts who will need to either quarantine, or test and isolate, and that number will continue to grow and change."

"Despite working as fast as this, and my thanks to all of our contact tracers, this variant is moving faster still.

"The time between catching the virus and passing it on is tighter than ever. For some of those cases, how long it takes between the onset of symptoms in the first and secondary case is averaging just over a day.

"Now, to put that in some perspective, the usual transmission is about five to six days."

South Australia on Wednesday enforced a hard border with residents of Greater Melbourne, as authorities revealed the man at the centre of the outbreak was likely to have caught it in Adelaide hotel quarantine.

The last time restrictions were tightened in Victoria was in February, when an outbreak growing to 13 cases prompted a five-day snap lockdown.

While all the cases in this outbreak have so far been linked to each other, which is considered a positive sign, authorities are concerned about a growing list of high-risk exposure sites linked to the new infections.

There are now more than 70 exposure sites - some dating back more than a week - spread across multiple Melbourne suburbs and at least two regional locations. The full list can be found on the Victoria health department's website.

In urging people to be tested, Chief Health Officer Brett Sutton said "there could be other cases out there".

University of Melbourne epidemiologist Tony Blakely said while most of the recent cases were already isolating after being identified as close contacts, the growing list of exposure sites was cause for concern.

"I'm not sure we can realistically assume our contact tracing will keep ahead of it, but I hope it does. But boy oh boy, that's a big ask."

The outbreak started with a Wollert man who, according to South Australian authorities, likely contracted the virus through aerosol transmission in an Adelaide quarantine hotel.

Authorities now believe the fifth man diagnosed, who had symptoms and was out in the community for days before being tested, could have infected many of the others in the cluster.

But they are still searching for the "missing link" that connects the outbreak to the Wollert man.

"It's just hard to believe that it hasn't got beyond the layer of people who are already in isolation or quarantine," Professor Blakely said.

Tighter mask rules and gathering gaps have been reintroduced in Melbourne to respond to the outbreak, but life otherwise remains as normal for most of the city.

Sutton said on Wednesday said there were "a whole bunch of elements we always look at" before making any further changes.

Those factors included how many more people tested positive, the type and number of exposure sites they generate and how long they had been out in the community.

Also worrying authorities is that cases have contracted a variant of concern - the B1617 strain which was first detected in India.

It is understood to be just as infectious as the B117 strain that was spreading at the time of the February lockdown.

Former president of the Australian Medical Association and Altona GP, Mukesh Haikerwal, said he expected a lockdown would be imminent if more cases were identified.

"We've been tough on our population previously and I expect we will get there again," he said.

Haikerwal has previously been critical of the state's contact tracing efforts, but said he was confident "we have got a department that's tuned into this".

There have been some concerns raised about exposure sites not being listed on the health department's website hours after being identified.

Sutton on Wednesday commended the "extraordinary" work of contact tracers in chasing down generations of the virus in the community.

The state's outdated record-keeping was highlighted as a problem during the deadly second wave, but significant upgrades have been made in the last six months.